At least 38 anti-government activists died : Odessa's Trade Union House set afire by Pro Kiev forces - Time for Trade Unions in Europe and the World to Speak up for brothers and sisters in Ukraine. 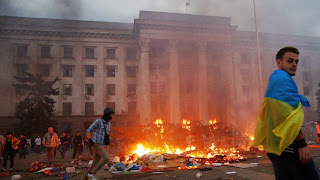 Alex Albu, coordinator of Borotba in Odessa: "When we came out of the burning building, we were attacked by a mob of fascists.

I can say that about a hundred people were injured then.

People jumped out of windows, it was all in smoke.

The injured were kicked. Me and one of our activists, Vlad, were seriously beaten down.

We headed to the hospital. Our activist Ivan got shot


At least 38 anti-government activists died in fire at Odessa’s Trade Unions House after suffocating with smoke or jumping out of windows of the burning building, Ukrainian Interior Ministry reported.

The building was set ablaze by the pro-Kiev radicals. Some 50 people, including 10 police officers, were also injured in the incident, the official statement said.

It was not immediately clear whether those injured in Friday street clashes in Odessa were included in those numbers.

According to the ministry, the Friday standoff on Odessa included “anti-Maidan” activists on one side and “football fans” from Odessa and Kharkov, as well as "euro-Maidan" activists, on the other.

A criminal case on the charges of mass unrest has been opened.

Earlier, a live video stream from inside the building showed disturbing scenes of supposedly dead bodies lying around the rooms with thick smoke in the air and blood stains on the floor.

Most of the bodies filmed had St. George ribbons attached to their clothes, distinguishing the victims as pro-Russian or anti-Kiev activists.

The person filming said he counted up to 25 dead bodies on the upper floors alone.

TRADE UNIONS PROTEST AGAINST THE MURDER OF BROTHERS AND SISTERS IN UKRAINE BY  PRO KIEV PUTSCHIST KILLERS.