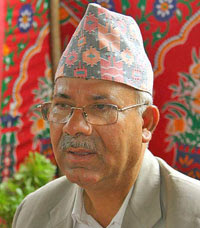 "No matter how much the Maoists deliver tirades against me, I do not nurture animosity towards them. I urge them to tread on the path of the peace process," said Nepal while speaking at a function on Sunday.

Stating that he did not believe in the practice of demeaning others, he said, "I am ready to bear any accusation, but the peace and constitution writing process must be completed within the given timeframe."

"I have assumed office at a difficult point of time," Nepal said, adding that he was committed to discharging his responsibility and bringing peace and prosperity in the country.

He noted that his top priority was to address the basic needs of the people such as food, shelter, clothing, education, health and security. "I am equally concerned about curbing corruption and restoring discipline."

The PM stressed that all the citizens should have the right to live with dignity. He also instructed the security personnel to maintain law and order to ensure that the people live in a fearless atmosphere.
Posted by nickglais on 6/02/2009 11:37:00 AM