At least 10 people were killed when police clashed with "terrorists" in Tehran on Saturday, state TV says. 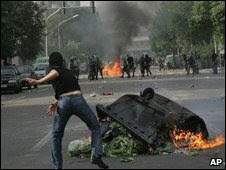 At least 10 people were killed when police clashed with "terrorists" in Tehran on Saturday, state TV says.

It accused "rioters" of setting two petrol stations and a mosque ablaze in protest at a disputed poll result.

State media also say five family members of one of Iran's most powerful figures, Akbar Hashemi Rafsanjani, were arrested during the protest.

The protests were sparked by disputed presidential elections, but have since escalated into a political crisis.

Iran's Supreme Leader Ayatollah Ali Khamenei has demanded an end to protest, but the BBC's Jeremy Bowen in Tehran says further protests are expected on Sunday.
Posted by nickglais on 6/21/2009 06:06:00 AM