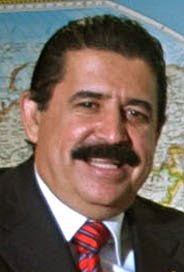 In Honduras, the democratically elected President Manuel Zelaya has been overthrown in a military coup. Zelaya was forced from the presidential palace and flown to Costa Rica early Sunday after he tried to carry out a non-binding referendum to extend his term in office. Speaking to the television network Telesur, Zelaya called his ouster a kidnapping and urged US support for restoring his government.

Honduran President Manuel Zelaya: “This is a kidnapping. This is an extortion of the Honduran democratic system. And I will ask the presidents of the Americas, including the US president—I want to hear the US Ambassador Hugo Llorens in Tegucigalpa if they are behind this, and if not, clear it up, because if the US is not behind this coup, they won’t be able to stay there forty-eight hours.”

Following Zelaya’s ouster, the Honduran Congress swore in former parliamentary speaker Roberto Micheletti as interim president. Micheletti immediately imposed a two-day nationwide curfew. But thousands of Zelaya supporters remain on the streets. Shots were reportedly fired at protesters near the presidential palace earlier today. There have also been reports of the brief arrest of ambassadors from Cuba, Venezuela and Nicaragua. Speaking in La Paz, Bolivian President Evo Morales condemned the coup.

The Obama administration has criticized the coup and said it will only recognize Zelaya as the Honduran President. Zelaya’s overthrow marks the first Central American military coup since the Cold War.