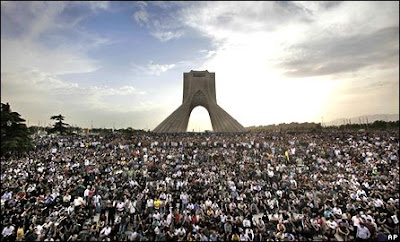 First posted on Kasama who received the following article from A World To Win News Service.
http://mikeely.wordpress.com/

15 June 2009. A World to Win News Service. The disputed results of the Iranian presidential election have given rise to unprecedented developments and confronted the Islamic Republic with a serious crisis both in the power structure and in society. The announcement that President Mamhoud Ahmadinejad had overwhelming won re-election shocked and surprised millions who had not voted for him. Angry young men and women began pouring into the streets immediately. Since then there have been clashes between the security forces and young women and men in cities all over the country. In addition to the giant protests in Tehran, many others have taken place in cities and towns all over the Iran and numerous universities, including Shiraz, Isfahan, Tabriz, Rasht, Ghazvin and Hamedan.

On 15 June, many hundreds of thousands of demonstrators filled the streets of Tehran. Some participants said there were a million people; at any rate, observers agree that it was the biggest protest since the 1979 revolution that toppled the U.S.-backed regime of the Shah and the biggest public event of any kind since the 1980s. Shooting from a compound of the regime’s Basij militia killed least eight demonstrators, according to initial reports.

The “reformist” candidates called for this demonstration, but the Interior Ministry refused to issue permission for it. The acting head of the security forces, Ahmad Reza Radan, warned that no unlawful demonstration would be tolerated. Candidate Mir Hossein Mousavi warned that if a permit were not issued, he would stage a sit-in at the grave of Ayatollah Khomeini, the founder of the Islamic Republic. People were burning to join with others to express their anger and discontent, not only because of this election but also because all they have gone through under this regime. They did not let the question of permission stop them and defied the authorities, who tried to prevent crowds from assembling by cutting off telephone text messages and filtering Web sites. In some areas of Tehran mobile phone service was cut off completely.

The security forces were particularly ruthless in responding the demonstrations on 13 June, after the official results were announced, and the following day. Two-man motorcycle teams – one driving, the other wielding a club – and Robocop-clad riot police equipped with electrified batons attacked the crowds. They fired plastic bullets and tear gas, and ganged up to beat those young men and women they captured. Even the presence of the TV cameras and foreign journalists did not deter the security forces. People fought back, sometimes successfully. They also attacked government-owned cars and buses, and banks. Shops and private vehicles were mainly left alone. In the middle of the night of 14 June, police and Basij militia members attacked and ransacked dormitories at Tehran University and the Technical Universities of Isfahan and Shiraz Many students were beaten and some arrested.

The most common slogan in the first few days of protests was “Mousavi get my vote back”, but the predominant slogans at the 15 June Tehran demonstration and in many of the university actions, including in Tabriz and Ghazvin, were “Death to the deceitful government” and “Down with the dictator”. On this occasion many people tried to impose the slogan “Allah is great”, heard especially the night before when people in Tehran climbed up to their roofs to protest (an action recalling the 1979 revolution that ended up bringing Khomeini to power), but this was not well taken by the majority of crowd and soon died away. The people had good reason to avoid it, since this is in fact the slogan and outlook of the Islamic Republic currently ruling over them. After initially trying to call off the rally, the candidates Mousavi and Mehdi Karoubi and “reformist” ex-president Mohammad Khatami finally joined it, as they explained, to prevent it from becoming violent. The security forces stood back rather than attack such a huge crowd frontally. Most of the demonstration was relatively peaceful, but toward the end there was shooting from a Basij compound.

These mass protests waged by angry youth brought back memories and discussion of the days of the 1979 revolution that they did not experience and often knew little about.

The mood and atmosphere among the people and especially the youth is remarkably high. They are determined to fight back. Their hatred for Ahmadinejad and the “Supreme Leader” Ali Khamenei and what they have gone through especially in the last four years seems to be unbearable for them. They were hoping to change this situation by voting Ahmadinejad out, but this did not work. Many of those who voted did not really believe in system or that Mousavi could bring about any change, but they wanted Ahmadinejad out. Now they are outraged not only because they believe that the election results were rigged but also because the regime seemed to do so blatantly and with disdain for public opinion. People feel that they have been insulted, betrayed, cheated and used. This anger has much deeper roots than the electoral crisis that brought it to the surface. The Islamic dictatorship has trampled the most basic rights of the people and especially women and youth, making life hell for them. In addition millions of people are undergoing economic and other kinds of hardship, with little or no hope for the future.

Many of the protestors were not yet born when Mousavi was the prime minister in the 1980s or are too young to remember the massacres of the communists and other revolutionaries under his government (before Iran adopted a presidential system). Nevertheless many had a sense that he would not and could bring about any fundamental change. Many are aware that their votes ultimately do not decide anything. They know that the four candidates were approved by the regime’s Guardian Council, which vets candidates to make sure that they will be appropriate servants for the Islamic regime. But many people hoped that at least they could remove Ahmadinejad, and that this would create a situation in which the harsh repression would be relaxed to some extent.

Why do so many people in Iran consider the election rigged, since Ahmadinejad clearly had mass appeal among the traditional supporters of the conservative factions of the regime and was able to celebrate his “victory” surrounded by many tens of thousands of supporters? Several factors suggest electoral fraud. But fraud or not, this election was particularly unpredictable because of the significant proportion of the electorate that generally boycotts or ignores the elections since they see no point in voting or no difference between the different regime factions and candidates. Many just don’t believe in the Islamic Republic at all. Then there are about 30-40 percent of the people in the middle – not firm on boycotting and not in favour of Islamic Republic either. They might swing to a boycott, or they might swing to those who promise change. Such people are often drawn into an election if they believe it offers even minimal hope. So some pollsters predicted that if the majority of this section participated, the main “reformist” candidate Mousavi could win in the first round. In the last presidential election in 2005, the participation of this section was very low. Ahmadinejad won in the second round and even then there were numerous reports of fraud and cheating.

Another reason for popular distrust in the announced results is the way they were announced. For the first time the Interior Ministry did not announce the results on a regional basis but rather gave figures for approximately every five million votes as they were supposedly counted. The ratio of the votes for all four candidates remained similar all through these announcements. (Ahmadinejad around 64-66 percent; Mousavi around 29-33 percent; the other two candidates Mohsen Rezaie around percent and Karoubi less than 1 percent.) Such a homogenous breakdown in every five million votes as they are cast is highly unlikely in any country of the world, let alone Iran with its regional variations in ethnicity, religion, culture and support for the regime or different regime factions. When the Interior Ministry finally released the results by region 15 June, after an unexplained delay, the figures did not correspond to the pattern in the last election. Along with this there is very widespread disbelief in the media, who heads are appointed directly by the Supreme Leader, and distrust of Khamenei himself.

This crisis represents the confluence of two contradictions, the underlying antagonism of interests between the people and the reactionaries in power, and the cracks within the power structure that are now sharper than at any point since its foundation. These two contradictions overlap and create both opportunity and danger for the people and all the regime factions. The cracks within the regime have never before been so wide as to endanger its stability. There is no doubt that masses have correctly recognised a favourable situation to express their hatred for the regime and its symbols Ahmadinejad and Khamenei. They have every right to protest and fight against a reactionary regime.

At the same time there is no doubt that leading figures in these events such as Mousavi, Karoubi and Khatami will try to use and channel the people’s rage and protest to strengthen their position in their fight with the conservative faction of the regime. They want a situation where they can trade off the people’s struggle for their own political advantage, and they will try their best to call off the people’s struggle when it no longer suits their interests. They do not want to risk the overall stability of this regime they have built on the corpses of thousands of revolutionaries and the oppression and suppression of the entire sections of the people. They would prefer no change at all to that kind of fundamental change, but that’s not what the people want.
Posted by nickglais on 6/17/2009 11:22:00 PM