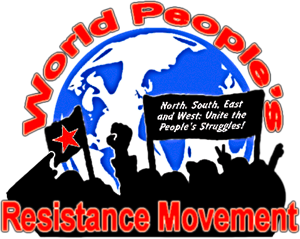 World People's Resistance Movement (Britain) has launched a new website to promote and unite people's struggle against the British ruling class and the imperialist system in general. This political website supports all anti-imperialist and revolutionary forces and individuals, regardless of their ideology, and informs the people about their statements, articles, leaflets and practical activities. All visitors to the site will have the opportunity to leave comments and join a lively public debate.

WPRM ( Britain ) is a democratic organisation, which supports resistance to imperialism and the revolutionary struggles (e.g. Nepal, India, Bhutan, Peru, Philippines etc.) of the peoples of the world. Its existence is a response to a world where imperialism is on the rampage, bringing nation after nation to ruin, from Afghanistan and Iraq to Somalia and Palestine .

WPRM ( Britain ) supports the right of oppressed nations to self-determination, which includes defending themselves when the imperialist ruling class and their client states wage wars of aggression against them. The oppressed peoples of the world (workers, peasants, women, national minorities, etc.) have the right to rebel against oppression and its root cause – the imperialist system.

In Britain , we need to unite with all those who always support the people's struggle against the imperialist ruling class. We believe that active participation of the British people in the global struggle against imperialism will pave the way for their liberation.

Join us to develop and promote the website to serve the people.