Iranian newspapers reportedly carried a letter to Mr Mousavi from Iran's police chief, Ismail Ahmadi Moghaddam, in which he warned that officers would "decisively confront" any further unrest.

A BBC reporter said he saw one man shot and others injured amid fighting, with streets littered with burning debris.

There were reports of deaths from both protesters and official sources.
A state TV report said "rioters set on fire the Lolagar mosque... in which unfortunately a number of our citizens were killed", but there has been no other word on the incident.

The protests went ahead despite a direct demand from the country's Supreme Leader, Ayatollah Ali Khamenei, to end them and accept President Mahmoud Ahmadinejad's victory in 12 June presidential elections.

In a statement on his website, Mr Mousavi accused authorities of cheating the Iranian people out of a rightful election result, reports said. 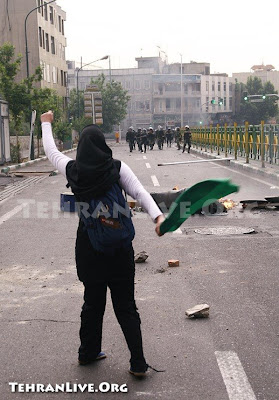