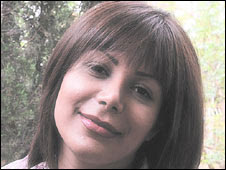 The funeral of Neda Salehi Agha Soltan, the name of the 27-year-old (this corrects earlier reports of a 16-year-old Neda) who was shot Saturday while attending a reformist demonstration in Tehran (and whose shooting was captured on video), has been forbidden to take place by the ruling elite.

Neda Soltan (Girl Shot in Video) Denied Proper Funeral in Iran
Date: June 22, 2009 clerics of Iran. According to the National Council of Resistance of Iran website, the mosque where the funeral was to be held, the Niloufar Mosque, was informed early Monday that they were to cancel the services.

Other mosques were informed that they were not to hold funeral services for the young woman who has since become the face of a populist rebellion against the current government and its suppressive clerical regime.

A vigil was called for at the spot where Neda Soltan was killed Monday as well. Hundreds of people showed up along with security forces ready to quell any signs of unrest. Iran's Revolutionary Guard announced early Monday morning that any demonstrations would be met with a harsh response.

The legitimacy of a regime -- both political and religious -- is at stake in the current political situation that threatens to tear Iran apart. The death of Neda Soltan and the taking of the death video that galvanized the world were subsequent events that occurred after the Supreme Leader Ayatollah Ali Khamenei announced Friday that the people of Iran were to accept the Guardian Council's decree that the June 12 elections were the will of Allah. He stressed that no way the election could have been fraudulent. Khamenei also stated that any demonstrations or protests would be met with those responsible being held accountable.

Rulings by the Guardian Council, a council of revered Muslim clerics, are seen as divinely inspired. Many in Iran thought the incumbent president, Mahmoud Ahmadinejad, had won the election by fraudulent means. With the clerics and the Supreme Leader putting their stamp of approval on the election results, they unknowingly de-legitimized their holy status.
Posted by nickglais on 6/22/2009 11:19:00 PM

why are you attacking iran? the islamic revolution was succesful, and iran is independent of the imperialist powers. Marxism has failed all around the world, but islam is unstoppable. the ussr used to say that islam was a feudalist ideology that would die out, but it is communist that has died while islam is strong. the iranian maoists, the sarbederan, are widely regarded as working in tandem with US imperialism. Leftists say that the US used islam, but if you are consistent, you will see that communism can also be used by the US and the imperialists. Ya Ali!