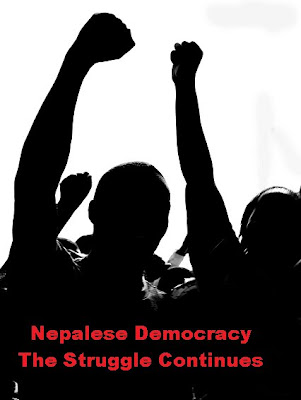 Traffic has come to a standstill in Kathmandu Monday morning as cadres affiliated to Young Communist League (YCL) and other Maoist affiliated organisations called an impromptu bandh protesting against the suspicious death of their fellow cadre.

Maoist cadres are obstructing traffic by staging demonstrations and burning tires at various places in Kathmandu since early morning. In some places, they have not allowed even cyclists on the streets, while in other places few private vehicles are plying. Students unaware of the situation were seen returning home after the schools closed down due to the bandh.

Youths tying red scarf marked ANNISU (Revolutionary) on their head vandalised a lorry carrying milk in Kesharmahal at 7 am, as police deployed on the scene remained mute spectators.

The Maoists have organised the bandh protesting against the suspicious death of a their cadre Rajendra Phuyal. A district committee member of the Unified CPN (Maoist), Phuyal’s body was found at the mortuary of Tribhuvan University Teaching Hospital, Sunday. Phuyal had gone missing since almost a week.

Maoists and the kin of the deceased have accused the UML-affiliated Youth Force of killing Phuyal after abducting him and the police of trying hide the details of the death. Phuyal had died on Thursday, but the police informed the kin only on Sunday, Maoists have said.

Police said, they found Phuyal unconscious on the roadside and he died while he was being taken to TUTH for treatment.

On Sunday, the Maoists had staged demonstrations in front of the Metropolitan Police Post, Balaju and the TUTH.

Meanwhile, the politburo meeting of the Unified CPN (Maoist) scheduled for today has been postponed for tomorrow in protest of the ‘killing’ of their cadre.
Posted by nickglais on 6/14/2009 11:43:00 PM