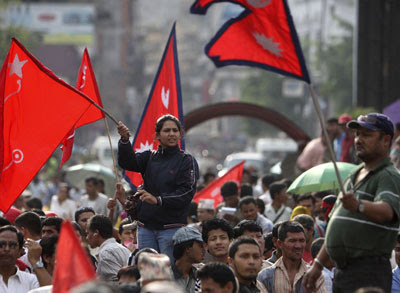 Normal life in Morang, Jhapa and Sunsari districts has been greatly affected on Saturday due to the bandh (shutdown strike) called by the Unified CPN (Maoist) to protest the President's step against the erstwhile government's decision to sack the army chief, and the 'encroachment' of Nepali land by India.

Traffic along the east-west highway traversing through these districts has been halted and major towns like Biratnagar, Itahari, Bhadrapur and Kakadbhitta remain closed, reports said.

The bandh organisers torched a vehicle of Kantipur Publications at Belbari in Morang. They also set fire to bundles of Kantipur Dainik and The Kathmandu Post.

The Maoists have been organising protests for the past few days demanding withdrawal of the 'unconstitutional' move of the President to restore civilian supremacy.

On Thursday, they staged demonstrations in Kathmandu and enforced bandh in western Terai.
Posted by nickglais on 6/06/2009 03:41:00 AM