Iranian Maoists to Regime "You wanted to fight ? Let's fight !" 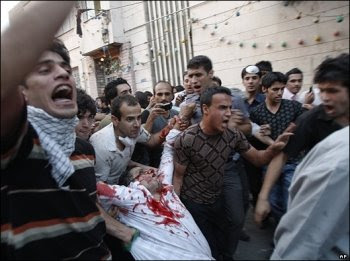 Iranian Maoists to Regime: “You wanted a fight? Let’s fight!”

Kasama received the following leaflet thanks to A World to Win News Service.

15 June 2009. A World to Win News Service. Following is a leaflet issued 15 June by the Communist Party of Iran (Marxist-Leninist- Maoist). The title is a challenge to the regime.

Rebellion, revolutionary situation, an explosion of the hatred felt by millions of people throughout the country: it doesn’t matter what you call the recent events. What matters is that we have entered a new period. Many bridges have been broken and in many spheres there is no return to past. The young women and men fighting courageously in the streets reflect the discontent and anger of three generations. Faces are bloody, bodies bruised, but nobody is talking about retreat or surrender. Armed-to-the- teeth mercenaries and herds of lumpen are wandering the streets but nobody pays any attention to them. Parents accompany their children in the streets. The initial shock and demoralization is rapidly disappearing.

In the mind of millions, the Islamic Republic of Iran’s disgrace in the election farce has discredited the “possibility of change and the rectification of the regime from within” far more rapidly and effectively than any political debate and reasoning. The leading faction took a serious gamble with this. And now may of the rebellious youth are thinking about ways for effectively getting rid of the regime.

There was a clear example of this yesterday in the students’ response to Zahra Rahnavard [married to Mir-Hossein Mousavi] who had gone to [Tehran] university to calm them down: “We didn’t come to battle for the presidency of Mousavi, we have come to defeat the coup and smash the dictators’ set-up”.

This faction is trying to put its own chains on people’s minds by trying to popularise the slogan “Allah is great” and adopting the colour green [symbol of Islam]. They seek and to channel the people’s energy and imagination towards the cesspool of their own negotiations with the “Leader” and the ruling faction. This situation places an urgent task on the shoulders of all courageous and conscious youth, women and workers: that they participate in the street battles with slogans and leaflets and help widen and deepen the perspectives and aspirations of the masses of people to the maximum. This is the precondition for continuing to avoid the wrong roads different factions of the ruling class are trying to get the people to take. The slogans of the rebellion should go beyond those limited and common slogans that are aiming at dictators – Ahmadinejad and Khamenei – and their infamy, and add other appropriate slogans:

We are women and men of war. You wanted a fight? Let’s fight!

We don’t want an Islamic monarchy!

We don’t want an Islamic republic!

Cannons, tanks and basiji [militia] scare us no more!

The only way to liberation is perseverance and persistence!

We don’t want the forced veil!

The sharp edge of the uprising targets the criminal gang of Ahmadinejad and the main directors of the scene behind him (a section of big capitalists, heads of the army and intelligence services, and a section of the Shiite clergy). But it is a big mistake if we limit the whole of the system to today’s putschists. All the factions of this state system, including the “reformists” , have spent 30 years in crime and theft. The fact that the wolves are now at each other’s throats in no way changes the anti-people nature of these factions. But the rift within the Islamic Republic is unprecedented. It has disturbed the internal coherence of the regime and weakened the regime in the face of the people. Ahmadinejad & Company’s show of force is a sign of desperation.

People should take maximum advantage of the weakening of the state and deal it effective blows. Women, youth, workers and teachers must win demands and rights with their own hands. For example, women can end the forced veil in practice, and by forming cells and taking charge of leading the struggles of women for liberation. Leftist students can and must form a coordinating headquarters for communication at the national level in order to dispatch the news of struggle and their own directives and slogans and popularise them widely. We cannot let Mousavi and the reformist faction become the headquarters of the struggle of the masses. If this faction becomes the “representative” of the people it would be a very heavy blow to the present liberating wave. We need our own revolutionary headquarters. Such an active headquarters, even if small, can become the foundation of a nationwide student organization. The workers of various factories from Ahvaz to Haft Tapeh, Karaj, Arak and Tabriz can rapidly form initial cells of a workers’ organization and become the general voice of the people against the Islamic Republic. By putting forward correct slogans and demands, they can become the real voice of the people and divert people’s thinking from “either Mousavi or Ahmadinejad” and explain that “Mousavi or Ahmadinejad” is exactly the IRI we have been experiencing for the last 30 years.

The previous generation of communists and liberation militants can play an important role in these two tasks: first they have the task of raising people’s sights from the narrow horizons of the reformists, and second, turning the initial links that are developing in the streets and in the heat of struggle into longer-term links in cells and various networks. There is no doubt that the active core and fighting force of this advanced and revolutionary political project should be made up of young students and workers in universities, neighbourhoods and factories.

People must know that Mousavi, Khatami, Rafsanjani and in general the whole ”reformist’ ‘ faction of the regime are negotiating behind the scenes with the “Leader” and the heads of the military and intelligence services in order to prevent the collapse of the whole IRI structure in the face of the people’s wrath. People must know that there are behind-the-scenes dealings between the heads of the IRI and regional and world powers (such as China, the EU, Turkey and the U.S.), with the aim of bringing a peaceful end to “the events”. The U.S.’s main concern is to open negotiations with the IRI in order to solve its problems in Afghanistan and Pakistan. In his key speech in Egypt – where he even praised the Islamic veil – Barack Obama emphasised that he has no problem with an Islamic republic. At present the U.S. is not in favour of “disrupting” the structure of IRI rule.

One important and decisive conclusion can be drawn from all this: people have come to understand their power. This power needs organization. People’s awareness is advancing rapidly. Their understanding can and must grow towards and reach the perspective of the overthrow of the IRI and making a real revolution, concentrating the suppressed dreams and longings of the majority of the people of Iran.

In his speech in Vali Asr Square Ahmadinejad called the rising masses “scum” and said that “the clean river of the people” will push them aside! This kind of talk means that the fight is seriously on and if we want to carry it through to the end we need to prepare. The regime and its various factions have their own political centres for deciding policy, developing slogans and manipulating people. The people need their own centres to analyse the political situation and devise policies for raising consciousness and continuing our own struggle.

The regime has its general staff and headquarters for military action and intelligence in order to suppress the masses. The people should have their own headquarters for the coordination, solidarity and organization of our own forces.