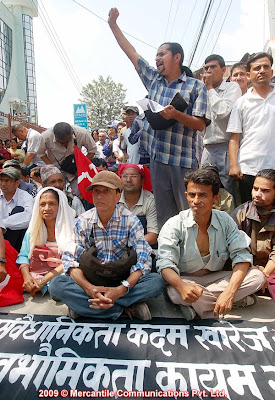 The Unified CPN (Maoist) Wednesday launched nationwide protest against President Dr Ram Baran Yadav's decision to reinstate the army chief who was sacked by the then Maoist-led government.

In the Kathmandu valley, hundreds of Maoist cadres demonstrated in front of the district administration offices of Kathmandu, Lalitpur and Bhaktapur, chanting slogans against the President's 'unconstitutional move' and demanding its immediate withdrawal.

Works at the DAOs was affected for hours due to the protest.

The Maoist party is to stage similar demonstrations at the VDC offices across the country and organise other protest programme in the following days "to restore civilian supremacy".

The party has said it would launch stronger protest movement if the President move is not retracted.
Posted by nickglais on 6/03/2009 12:35:00 PM

it seems to me clear that the nepali revolution is over. the maoists have changed into a revisionist/reformist party. their bluff about taking the state was called by the army, and it is not a secret that the PLA are getting paid by the World bank etc. am i correct in assuming this? it is getting more and more unbelievable that the nepali maoists are really going to take the state. demonstrations and the like are fine, but if that is all the maoists can do, we must assume the revolution is over.