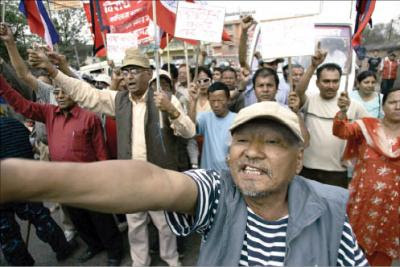 Protesters gathered in front of government offices yesterday in the capital, Kathmandu, and other districts to prevent workers entering, Nepalnews.com reported on its Web site. Police clashed with demonstrators when some offices were vandalized and the rallies disrupted traffic in Kathmandu and other cities, according to Nepalnews.com.

Dahal resigned as prime minister last month after heading a coalition led by his Unified Communist Party of Nepal (Maoist) that won most seats in elections last year, the first since the rebels ended a 10-year insurgency in 2006.

The dispute is delaying the preparation of a new constitution for Nepal after lawmakers last year voted to scrap the country’s 240-year-old monarchy and turn the Himalayan nation into a republic.

Nepal, the leader of the Communist Party of Nepal (Unified Marxist-Leninist), called on the Maoists two days ago to “stop monkeying around,” and end attacks on government offices, Nepalnews.com reported at the time.

The prime minister said the order reinstating Katawal was made to correct a mistake by the Maoists. He pledged that his coalition government will rehabilitate former rebels and aid those affected during the insurgency that killed 13,000 people.

President Ram Baran Yadav last month rejected the firing of the general, a move that Dahal said overstepped his powers. The Maoist leader said the new government is intent on disrupting the peace process.
Posted by nickglais on 6/22/2009 01:04:00 PM