Curfew in Banepa as local locals clash with bandh organisers 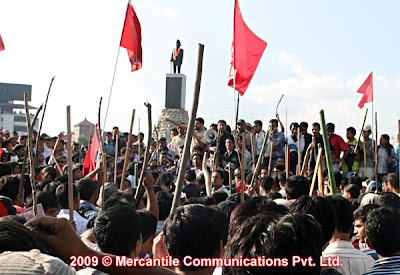 The district administration of Kavre has declared indefinite curfew in Banepa after violent clashes between the locals and the activists of Maoist-affiliated Tamsaling Rastriya Mukti Morcha (TRMM) which has called bandh (shutdown strike) in ten districts including Dhading, Kavre, Rasuwa, Dolakha, Ramechhap, Makwanpur and Sindhupalchowk today.

The curfew starting from 2 pm has been enforced in areas between Sanga and Kathmandu University in Dhulikhel.

Clashes erupted after the bandh organisers tried to forcibly shut down shops and vandalised vehicles belonging to the local residents of Banepa.

The locals pelted stones at the protesters and vandalised the district office of the Unified CPN (Maoist). Some locals and bandh organisers have been injured in the clashes. Dozens of vehicles were vandalised during the clashes.

A large number of security personnel have been deployed in Banepa and surrounding areas after the incident. The situation was still tense until the local administration imposed curfew.

The bandh --organised to protest the President's decision to reinstate the army chief sacked by the erstwhile government, and the encroachment of Nepali border by India -- has affected normal life in other districts as well. TRMM cadres staged rallies and obstructed traffic along the Siddartha Highway, sections of Prithvi Highway and other roads.

Travelers have been stranded along Prithvi Highway, the main highway connecting the capital with the rest of the country, as traffic has been obstructed, reports said.
Businesses including markets and educational institutions also remain closed in the 10 districts.

Coinciding with the bandh, Nepal Educational Republic Front, a union of teachers close to the Maoists, also launched agitation from today with various demands. As part of the protest, the teachers will wear a black band and put black flag in their educational institutions.

Meanwhile, the Maoist cadres also obstructed traffic from 10 am to 12 pm in the capital as part of their protest.

The Unified CPN (Maoist) and its sister organisations have been organising various protest programmes against the President's move and border encroachment for the past few days.
Posted by nickglais on 6/07/2009 07:50:00 AM