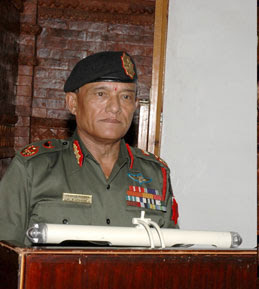 General Secretary of the CPN (UML) Ishwor Pokharel has hinted a possible premature termination of Chief of Army Staff Rookmangud Katawal if all political parties agree for the action.

Addressing a function in Sindhulimadi Wednesday, Pokhrel said all political forces in the country must have same position on issues like control and mobilisation of Nepal Army.

He further said his party objected on the removal of Katawal by the Maoist-led government as the Maoists went ahead unilaterally.

He questioned the Maoist leadership, who has repeatedly tagged Madhav Kumar Nepal as a loser in elections, as to why they had asked Nepal to lead the constitutional committee of the constituent assembly.

Additionally, Pokhrel claimed the UML-led coalition government will run till the entrusted tasks are completed.

Criticising the Maoists for their demonstrations on border encroachment, Pokhrel said UML-led government plans to settle all border disputes through dialogue at the diplomatic level.
Posted by nickglais on 6/25/2009 12:31:00 PM