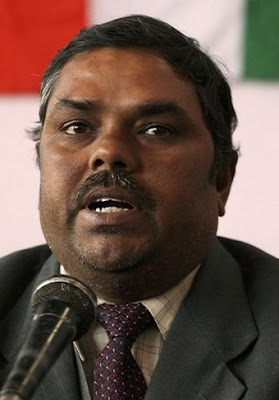 Yadav faction held the CC meeting in Birgunj, Parsa District, whereas the Gacchedhar faction chose Kathmandu to organize the CC meeting. However, the story is not as simple as that.

Birgunj turned into a fight-to-finish battle ground on Wednesday, June 10, 2009, between the cadres of the two factions wherein three women MJF-Gacchedhar Constituent Assembly members and some dozen cadres have been seriously injured.

The unfortunate incident took place when the Gacchedhar cadres all of a sudden cropped up in front of the meeting hall where the Yadav faction was holding its meeting, Hotel Samjhana, and started chanting anti-Yadav slogans.

The Gacchedhar cadres entered into the meeting hall and targeted the party president Mr. Upendra Yadav.

“Infuriated Yadav cadres attacked us with home made weapons”, says Karima Begun adding that “the police personnel present at the venue remained a mere spectator when the fierce battle was on”.

The Birgunj meeting began right at 12:00 noon where some 29 CC members were present out of the total 35 CC members.

Prior to the meet began, MJF President Mr. Upendra Yadav briefly talked to the media.

He said that Nepali Congress President Girija Prasad Koirala and the Madhav Nepal of the UML were the ones who divided his party.

Yadav also blamed that Koirala and Mr. Nepal were in essence the agents of the Indian establishment.

Here in Kathmandu, the meeting organized by the Gachedhar Faction declared that with the Yadav faction sacking some ten central committee members the party stands formally divided now.