Peace and War in Nepal 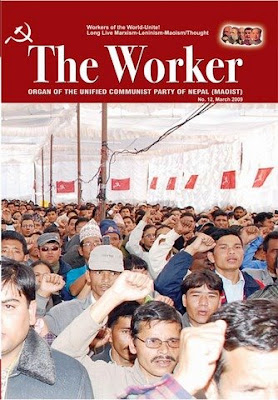 The revolution in Nepal can only be carried out by a war against the bourgeoisie not by reconciliation. The peoples and revolutionaries of Turkey are sided with the Nepalese communists, together with the peoples and revolutionaries of the World.
Upon resignation of the prime minister, the government that has been established after the April 2008 elections under the leadership of The Communist Party of Nepal (Maoist) –CPN(M)– abandoned its duties.

Since 1996, the civil war in Nepal developed and, under the leadership of CPN(M) guerilla forces, seized the considerable part of the country. A "peace agreement" was signed with the purpose of "ending the civil war" in 2006.

With this agreement, the constitutional government has been abolished and the monarchy, which sucked the blood of Nepalese people for 200 years, became a history. The Nepalese revolution won a historical victory against reactionism. But the future was of the major importance. How would the class struggle continue thenceforth? Which class would leave its stamp on the state power?

Revolution had to be carried out uninterruptedly under the conditions of ongoing bourgeoisie existence. As a matter of fact, after three years, the struggle for power against the bourgeoisie is going on in many different forms; and bourgeoisie will not leave the power that easy.

According to the 2006 agreement, the monarchy would be terminated, general elections would be held and 19.000 guerillas would be recruited to the army.
CPN(M) won a considerable victory in the general elections of April 2008. It became the first party after winning 220 chairs of the 601. Nepal Congress Party, the party who defends the order of bourgeoisie, won 110 chairs; another Communist Party, CPN(UML) won 103 chairs in this election. Two Communist Parties formed a joint government. And as the time passes by, it became obvious that the revolution would not follow a straight line, and that the CPN(M) had to continue the war against the bourgeoisie intensely and irreconcilably.

One of the most important dimensions of the clash between the government under the leadership of CPN(M) and the general staff was related to the quality of the Army. The leader of CPN(M) and the Prime Minister Prachanda (Pushpa Kemal Dahal), dismissed the Chief of General Staff. He had many rightful reasons for this.
Katawal, the Chief of General Staff, recruited the formerly dismissed 8 torturer and murderer generals back and restored them to their previous duties. Secondly, 2800 new soldiers were recruited to the army without asking the approval of the government. Thirdly, although it was guaranteed by the agreement, the Chief of General Staff blocked the recruitment of 19.000 guerillas to the army.

The Chief of General Staff was declaring that he is against "the recruitment of the troops who are committed to an ideology". But of course the torturers and the murderers that he recruited back to the army had a certain ideology…

The plans of the bourgeoisie were clear.

Prime Minister Prachanda resigned because of this development.

After the resignation of the Prime Minister, members of Nepal Congress Party, the representatives of bourgeoisie, tried to deepen the crisis in favor of bourgeoisie. The political crisis in Nepal still goes on… The determinant factor in this process will be the Communist Party led by Prachanda, and the policies to be pursued by it.

As it can be seen, the democratic revolution process continues with conflicts. And this conflict will go on unless the ruling classes are liquidated from their management mechanism, their positions in the social life, and their dominant roles in the production process.

The current situation, which can also be explained as a "political crisis," is one of the conflicts which can be faced during these processes. The real reason is the fact that the conflict between revolution and counter-revolution continues. In Nepal, the "power struggle" is not solved definitely yet.

Bourgeoisie made some compromises because of the power balances created by the guerilla war, but since its power as a class could not be destroyed, it did not give up the idea of hindering, and gradually liquidating the revolution. They never accepted the "peace" and "reconciliation" willfully.

To think that bourgeoisie gave up its war would be the biggest political mistake to be done. This mistake, which had been done by various progressive forces [throughout the world so far,] led to the destruction of the revolutions without exception.

Actually, the latest developments in Nepal show that the idea of "reconciliation" with the bourgeoisie is a pipe dream. Obviously, the bourgeoisie is trying to gain time. There must be a reason for their sustaining the fascist recruitments and for their attempts to take the military out from the government initiative.

The liquidation of monarchy in Nepal was also beneficial for the bourgeoisie. But of course the bourgeoisie do not want a revolution in Nepal. What they want is a bourgeois power. Bourgeoisie’s aim is to be alone in the power. Its reconciliation with the communists against the monarchy does not mean that the bourgeoisie gave up this aim.

Similarly, none of the existing agreements should lead to abandon the aim of a REVOLUTIONARY PEOPLE’S POWER and of an uninterrupted SOCIALISM in terms of revolutionary forces.

It is evident that, the only way to carry out such duties is not to withdraw or to reconcile with bourgeoisie, but to fight against it. In the face of the revolution, bourgeoisie does everything for its class interests. It approaches to the problem with a power perspective. Communist Party should also consider the problem in class terms and think with a power perspective. The problem is to seize the power completely and to advance the revolution. Today, the Party must be more daring than yesterday.

If the Communist Party hesitates to carry out the inevitable duties and conflicts of the class struggle with reasons like "unwillingness towards conflict", "not to go back to the old days", "considering the balance with imperialists" and so on, the power will fly from the palms of the people’s forces. We witnessed this in the revolutionary processes of various countries. E.g., Sandinistas in Nicaragua in 1979, handed the power to the bourgeoisie with an "election game" after they paid such a heavy price [during the revolution].

To gain the power is not that easy. Thousands, even tens of thousands among the people’s children die a martyr. Therefore the power should not be given easily. The power cannot be abandoned to the hands of the bourgeoisie by policies of peace and dialog.

The Armed People and the Guerilla Army is the Guarantee of Revolution
The revolution process cannot be explained schematically and cannot be fixed into certain patterns. Apart from the general route of the revolution, many big, anticipated and unanticipated problems are faced, so that no ready-made recipe can be presented. Such a similar process is experienced now in Nepal.

Although we do not have the ready-made recipes, today’s duties are no secret in terms of the general courses of revolutionary processes. In that sense, the process is not indefinite and ambiguous. Against us, there is the bourgeoisie that tries to liquidate the revolution. Bourgeoisie takes its main strength from imperialism, from the reactionary feudal remnants and from the reactionary countries of the region which are living with the fear of a revolution.

Today’s step in the continuation of the class war against the bourgeoisie is to advance the democratic revolution. To do that, the bourgeoisie must be besieged; it should be followed a policy of a wide front, which unites the laborer masses and the classes that would benefit from the revolution, and beginning from the moment that the development of revolution is hindered by the bourgeoisie, the hindrances must be eliminated by taking up the arms with the power of the masses, if needed.

The daring of the guerilla forces and the leadership of the Communist Party, which destroyed the Monarchy, should continue without any losses in the existing form of the class war.

There can be ceasefires and various reconciliations in the processes of democratic revolution. But none of these reconciliations mean a "peace" with the bourgeoisie, namely with the absolute enemies of the revolution. Those who thought otherwise, those who determined their policies according to this, have lost all the time since.

Actually, these last developments are nothing but a policy of pushing the revolution backwards and of gradually liquidating it. Running away from the power struggle and its responsibilities, or pipe dreaming just will consume the revolution.

A people without armed force is powerless. A people who do not have an army and arms cannot defend its power. An unorganized and unarmed people is damned to be defeated. It is obvious that the revolution cannot be carried out by contending ourselves with the first victory.

In this sense, one of the problems which should be treated meticulously is as follows: an agreement and a policy, which will lead to the dissolution of the guerilla army within the regular army, is very risky for the revolution. The peoples of the world and revolutionary organizations know by their historical experiences that the bourgeoisie can never be trusted. The war will go on until the bourgeoisie gives its last breath. There can be no peace with the bourgeoisie. The one, who makes a class peace with bourgeoisie, loses.

Nepalese revolution should not abandon the fundamental forces (people’s army) that bring the revolution in its existing state and its fundamental policy (fighting against the ruling classes, not reconciling with them).

Yuruyus [The March] journal, which is being published in Turkey, started in 1986 under the name of Cozum [Solution], it became Mucadele [Struggle] in 1990, Kurtulus [Liberation] in 1995, Vatan [Homeland] in 2000, Ekmek ve Adalet [Bread and Justice] in 2002 and became Yuruyus 5 years ago. It makes publications with a revolutionary socialist ideology. www.yuruyus.com

Yuruyus journal faced many kinds of oppression, including attacks against its paperboys and girls, bannings, confiscations and busts. In 2007 Ferhat Gercek, 17 years old paperboy, was paralyzed by the police bullets. In September 2008, Engin Ceber was arrested while he and his three friends were distributing the journal. Engin Ceber lost his life because of the tortures that he was subjected in the prison. http://enginceber.org/we-want-justice-not-apology
Tr: Eren Buglalilar
Posted by nickglais on 6/09/2009 12:02:00 AM