Khanal says he had agreed for action against army chief 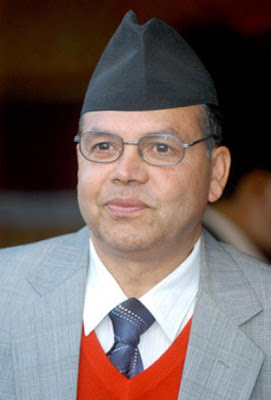 CPN (UML) chairman Jhala Nath Khanal has admitted that he had given the nod to take action against army chief Rookmangud Katawal but blamed Maoists for not consulting coalition partners about its procedures.

Speaking at a party gathering in Parbat district Monday morning, Khanal said his party had suggested for compulsory retirement of two top brass of the army to end the dispute, adding, the Maoists ignored his recommendation.

However, he did not clarify why second-in-command Kul Bahadur Khadka and Maoist choice for army chief, should be terminated from the job.

Alleging Maoists to be fascists, Khanal claimed the cause for fall of Maoist-led government was the behaviour of the Maoist leadership ignoring other coalition partners while taking important decisions.

In midst of his harsh words against Maoist leaders, Khanal called for forgetting the bitter past and ending hostilities for fresh start of cooperation and consensus so that mandated tasks of state restructuring and writing a new constitution would be completed on time.

Hinting at emerging ‘groupism’ within his party, Khanal called for a united voice to strengthen the party and implement the government decision effectively.

He claimed all communist parties in the country must follow the path of UML for bringing the dream of communist unity into reality.

Khanal has returned to Kathmandu after attending party functions in Baglund and Parbat.