Prachanda said the Maoists were in favour of a government with civilian supremacy that could stand up to foreign intervention. 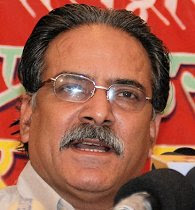 Speaking at a book launch her on Thursday, Prachanda said the Maoists were in favour of a government with civilian supremacy that could stand up to foreign intervention.

Prachanda, who had resigned from his post slamming foreign intervention, said, "remote controlled government cannot safeguard democracy."e further announced all the political parties to forge a broader political understanding in order to accomplish the tasks of writing new a Constitution and peace process.

"Let's sit together, review the situations and let's conclude the issues of Constitution drafting and peace process," Kantipur quoted him as, saying.

Saying that conspiracies are being hatched to drag the country towards autocracy, Prachanda warned that the country could plunge into a disaster due to civil war.

Meanwhile, the Madhesi Janadhikar Fourm (MJF) leaders have finally projected itself as the party to lead the new government.

In a statement issued by Co-chairman Jay Prakash Prasad Gupta, the party said it would take initiatives to gather support and solidarity from other parties for formation of a new government under its leadership.

The statement further said that it would support the party of coalition agreeing in written to implement eight-point -demand signed with the United Democratic Madhesi Front (UDMF) on Madhes issues incase the party fails to garner much support for formation of the government under its own leadership.

Meanwhile, other two alliance of UDMF including the Tarai Madhesh Lokltantrik Party and the Sadbhawana Party (SP) have already agreed to support CPN-UML in heading the new government

The Central Committee (CC) meeting of MJF had laid out options such as either all the Madhes-based parties would participate in the UML-led government, or form the new government in the leadership of Madhesi parties, or to support the government from outside the government.