Historic mistake the UML decides to pull out of government 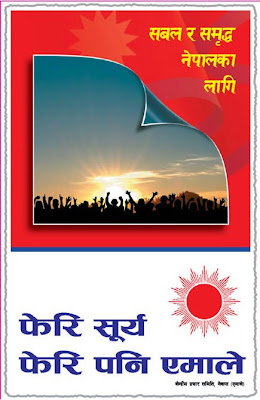 The second largest coalition partner CPN (UML) has decided to pull out of the Maoist-led government, opposing the latter's unilateral decision to sack Chief of Army Staff Rookmangud Katawal.

An emergency meeting of the party's standing committee held after the cabinet decision to sack the army chief Sunday afternoon decided to call back its ministers from the government and withdraw its support to Prime Minister Pushpa Kamal Dahal.

The UML are making an historic mistake

To quote from the May Day 2009 speech of Barburam Bhattarai

"The UML needs to take a stand. The UML is refusing to be for or against anything. It is like trying to be a third sex. It is useless. And because of this indecision the processes have been delayed. The UML is suffering from a profound identity crisis. They are trying to be a third option, when the only options to the people of Nepal are revolution or reaction. There needs to be leftist unity so we can break the deadlocks and achieve progress in Nepal. If the UML chooses not to do this then they too will be swept into oblivion by the progressive waves of the Maoist movement."

The UML members must now desert it leaders and join the battle for democracy and civilian supremacy and support the Maoist Government. The UML leadership has choosen oblivion it members must choose democracy.
Posted by nickglais on 5/03/2009 06:29:00 AM