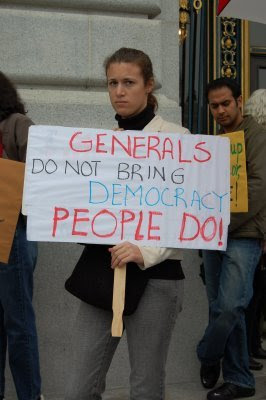 KATHMANDU, May 3 (Xinhua) -- An informal meeting of the army generals at the Nepal Army (NA) Headquarters in capital Kathmandu on Sunday afternoon decided to keep all of its divisions on high alert.

The decision came after the government decided to sack the Chief of the Army Staff (CoAS) Rookmangud Katawal on Sunday.

Quoting its source, the local news website THT online reported that CoAS Katawal informed the army generals that he refused to accept the retirement letter.

The main towns of the capital has already turned unrest following the government's decision to sack Chief of the Army Staff (CoAS) Rookmangud Katawal on Sunday.

The clash was occurred while NSU took to the streets to protest the government's decision while UCPN-M cadres staged rallies to support the government move.
Posted by nickglais on 5/03/2009 05:18:00 AM