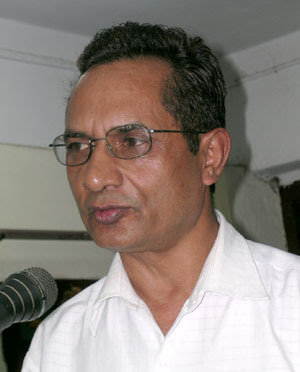 The Unified CPN (Maoist) has refused Prime Minister Madhav Kumar Nepal’s call for the former to join the government.

Talking to media after the PM’s address Maoist spokesperson Dina Nath Sharma said there is no possibility of joining the government or working together until ‘civil supremacy’ is maintained.

It is quite a joke that the PM has approved of the very issues that are our major grouses and called us for consensus, said Sharma indicating the PM’s address which hailed President Dr Ram Baran Yadav and the Nepal Army terming their role in the ongoing peace process as praiseworthy.

PM Nepal had called the Maoists to support him by joining the government to take the peace process to a logical conclusion, in his first address to the nation Tuesday afternoon.

Nepal lauded President Yadav for playing a guardian’s role and appreciated the army for internalising democracy and republicanism.

The Maoists had accused the army of disobeying a civilian government and the President of acting unconstitutionally to block the decision of an elected government.

Analysts say, the ongoing peace process is at stake due to the mutually contradictory stances of the Maoists and the new government.

The Maoists have already said they would continue agitation from parliament and the street until the ‘unconstitutional move’ of the President is corrected.

The peace process has already been derailed and there can be no consensus until these wrongs are corrected, said senior Maoist leader and finance minister in the previous government Dr Baburam Bhattarai talking to BBC Nepali service, Tuesday.
Posted by nickglais on 5/27/2009 12:52:00 PM