“Out from the government is an opportunity for us to complete the revolution, President Ram Baran Yadav has given the Maoists the golden opportunity 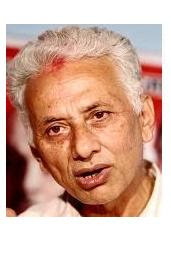 Addressing the Nepalgunj gathering, the Maoists Party Central Secretariat member Mr. Chandra Prakash Gajurel said that his party will now take on the path to conclude the incomplete decade long rebellion led by his party.

“Now we will capture the State, which is the prime objective of the Maoist party,” Mr. Gajurel told while addressing a gathering in Nepalgunj, May 17, 2009.

“Mr. Nepal is being lifted to the seat of the prime minister as per the dictates of his Indian masters”, said Mr. Prakash.

Lila Mani Pokharel, another Maoists leader in Dhangadi threatened to grab the UNMIN monitored weapons housed in the cantonments now.

“If the reactionary move continues, we may have to finally grab our weapons”, said Pokharel.

“The Maoists were very simple when they were in the government, out of the government we have become dangerous”, also said Pokharel.
Posted by nickglais on 5/18/2009 12:30:00 AM