KATHMANDU (AFP) — Police in Nepal used batons on hundreds of Maoist protesters rallying Monday in the capital Kathmandu in support of their party leader Prachanda, who resigned as prime minister last week.

Riot police moved in after the group of about 400 protesters tried to march towards the office of the president, an officer at the scene, Ganga Budathoki, told AFP. 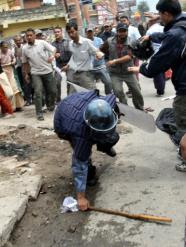