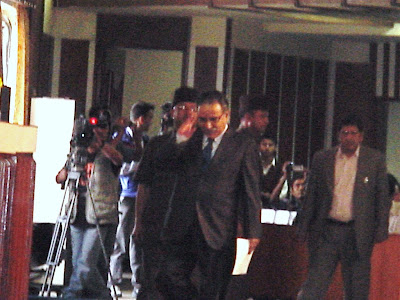 PM Prachanda on path to his last podium

The press conference was a cliffhanger. We all knew the importance of today's cabinet meeting and the statement by the PM to follow. Speculation about the outcome was mostly anticipating the UCPN(M) would announce continuing with a minority government following the withdrawal of the UML. Preliminary announcements were about decisions made by the cabinet. The President's reversal of the government decision to sack general Katawal was declared illegal. The resignation of the UML from the government was accepted. Some appointments in the Armed Police Force were confirmed. Then Prachanda came in and dropped his bombshells.

Perhaps Prachanda did the only thing possible and perhaps it can come to be seen as a bold tactic. Maybe we should not have been surprised.

A couple of days ago Bhattarai said "We have no qualms to go to the people again. We had a price tag on our head in the past. Government is not a big thing for citizen supremacy. We will go to the people to institutionalize democracy and taking peace process to a conclusion."

NC leader Oli had this to say about that according to a report: "Now, it is time the Maoist quit the government, the UML is ready to lead the country much effectively that the Maoists...safe landing of the country from the transitional period is possible only as and when the UML leadership is told to lead the nation." So the Maoists did what they said they would. Now the President has forced the move, its time for the UML to put-up or shut-up.

As I have characterized the Maobadi in the previous posting, they took an essentially militant stance: "Join us in consensus and avoid a popular uprising, or we will leave and there will be a popular revolt". I also have suggested elements of the NC and the UML have been flexible towards the Maobadi simply because they realize the improbabilities of leading a government themselves with limited popular support and a possible new armed rebellion. Now the President's move has brought them their worst scenario.

What if this is not the worst scenario for the people even if it may be the end of the road for the Maobadi in government?

The sad yet noble ending, a successful soft coup engineered by the Indians through the President.The Maobadi forced their hand and now we see the illegal hand of the masters.

The way has been delivered to the people who should see clearly now that Nepali citizen power is a choice standing between themselves and a continued life as Indian serfs, as fodder for imperialism.

If the people will now prevent the operation of government then take over that operation while writing the constitution, if they will in effect dictate over the parties who are now taking the reigns, parties who represent oppressor classes, then the Maobadi's proclaimed objective is met anyway
Posted by nickglais on 5/05/2009 02:33:00 AM