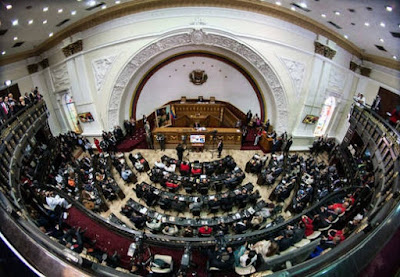 Although Venezuela's National Assembly's has been operating outside the law since 2016, Washington painted the court ruling as a “power grab."

The U.S. government claimed Thursday that Venezuela's top court had 'usurped'  power from the country' national assembly, after the Supreme Court made a statement about its responsibility to ensure the rule of law in a ruling on a constitutional interpretation on joint public-private ventures.
State Department spokesman Mark Toner said, “The United States condemns the Venezuelan Supreme Court's March 29 decision to usurp the power of the democratically-elected National Assembly,” according to NBC News.

“We call for the government of Venezuela to permit the democratically-elected National Assembly to perform its constitutional functions, hold elections as soon as possible and to release all political prisoners.”

In a ruling on an appeal filed by the Venezuelan Corporation of Petroleum to Article 33 of the Organic Law of Hydrocarbons, the court stated that the National Assembly had authority to approve such ventures. The court ruled that since the National Assembly continues to be in contempt of the constitution, the top court will "ensure the rule of law" and will exercise parliamentary powers where necessary in the ruling issued today on the joint venture.

"As long as the disrespect and invalidity of the proceedings of the National Assembly persists, this Constitutional Chamber will ensure that the parliamentary powers are exercised directly by this Chamber or by the body it has in place to ensure the rule of law," said the ruling.

Senators Marco Rubio, R-Fla., and Bob Menendez, D-N.J., also released a joint statement on Thursday, saying the decision was “an attack on what remained of democratic institutions in Venezuela.”

Since January 2016, the Supreme Court ruled that the National Assembly was in contempt of the constitution by the Supreme Court over fraud charges involving opposition deputies from the state of Amazonas. The officials were caught in a recording illegally offering sums of taxpayer money to citizens, encouraging them to vote for opposition candidates.

When the Supreme Court ordered the National Assembly to hold elections to replace the corrupt leaders, the legislative body refused.

Venezuelan Foreign Minister Delcy Rodriguez said in a statement earlier in the day, “We denounce attempts by the regional right to attack the Venezuelan democratic system, which is popularly supported and based on Bolivarian ideas."

“Venezuela categorically rejects intervention by the Government of Peru on Venezuelan internal jurisdiction matters,” Rodriguez added, commenting on Peru’s decision to remove their Venezuelan ambassador over the Supreme Court decision.

According to constitutional experts, the country's legislature could reinstitute its status by removing the authorized legislators from the positions they were illegally sworn into.

Government officials have accused the opposition of attempting to provoke an institutional impasse in order to justify an external intervention.