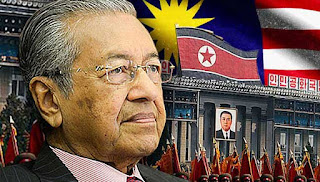 Democracy and Class Struggle says the statement from Dr Mahathir Mohamad about North Korean Malaysian Relations is the strongest indication yet that Malaysia did not have freedom of action concerning the diplomatic and security issues arising from death of Kim Jong Nam in Malaysia.


The former prime minister suggests Malaysia should return to being a non-aligned nation.

Malaysia should not make North Korea its enemy, said former prime minister Dr Mahathir Mohamad as he asked for the current diplomatic tension between the two countries to be handled properly.

“We shouldn’t allow this incident to turn North Korea into our enemy.

“We have to handle this wisely and make it a lesson for us to learn, as this is the first time we have faced such a situation.

“Because there are plenty of foreigners here, it may bring things that are not good for this country,”

he told a press conference at the Perdana Leadership Foundation here today, without elaborating on what he meant by “things that are not good”.

Mahathir, who is chairman of Parti Pribumi Bersatu Malaysia, added that the government could have handled the crisis with North Korea better, but it didn’t, causing tension between the countries.

He however admitted that this might be due to the lack of experience in handling such matters, saying conflicts like this had never happened during his administration
.
“Our past policy was to be non-aligned and not tie ourselves with any bloc. We were friends with all countries, despite their policies or ideologies.

“But it’s different now, because we have ties with some countries which in a way, limits our freedom.

“So it’s better for us to go back to being non-aligned,” he said.

Ties between Malaysia and North Korea have soured since the murder of Kim Jong Nam, the half-brother of North Korean leader Kim Jong Un, in klia2 on Feb 13.

North Korean ambassador Kang Chol accused Malaysia of colluding with outside powers to defame his country, claiming that the Malaysian government had something to hide in its conduct of the investigation into the death of Jong Nam.

Pyongyang had protested the murder investigation even as Malaysian police named an embassy officer as one of the suspects.

But Foreign Minister Anifah Aman denied this and said recent events, including the release of North Korean Ri Jong Chol due to lack of evidence, was proof that the investigation was conducted in an impartial, fair and transparent manner.

Following the furore over the accusations by Pyongyang, Wisma Putra recalled Malaysia’s ambassador to North Korea, and subsequently expelled Kang.