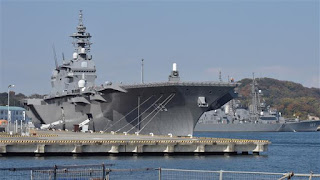 Japan plans to send its largest warship on an extended mission to the disputed South China Sea before it heads to the Indian Ocean for joint naval drills with the United States and India.

The Izumo helicopter carrier will begin a three-month journey in May, Reuters reported on Monday, citing anonymous sources who had knowledge of the plan.

The warship will join the Malabar joint naval exercises with Indian and US forces in the Indian Ocean in July.

During the journey, the vessel will make stops in Singapore, the Philippines, Indonesia, and Sri Lanka. It was not clear if the Japanese vessel was planned to sail through the areas of the sea claimed by China as its territory.

“The aim is to test the capability of the Izumo by sending it out on an extended mission,” said one of the sources. “It will train with the US Navy in the South China Sea.”

According to the sources, the warship will return to Japan in August.

Japan, a key US ally, is boosting defense ties with the Philippines and other Southeast Asian countries, some of which are engaged in territorial disputes with China in the South China Sea.

Japan has no claims in the South China Sea but has expressed worries about Beijing’s influence in the region, where five trillion dollars in trade passes every year, much of it to and from Japanese ports.

Tokyo is, however, involved in a separate territorial dispute with Beijing on an uninhabited yet strategically-important island group in the East China Sea.

Back in September 2016, a close confidante of Japanese Prime Minister Shinzo Abe said that Tokyo would increase its engagement in the South China Sea through joint training cruises with the US Navy, capacity-building assistance to coastal nations, and exercises with regional navies.

Japan and the US recently wrapped up a week-long joint naval drill in the East China Sea on Friday. The war games involved Japanese destroyers and a US Navy carrier strike group.