Korea : Rex Tillerson is no diplomat - opens War options on North Korea - OPLAN5015 the military option doctrine of limited war is a fantasy and as the Korean Times pointed out will lead to full scale War on the Korean Peninsula

Democracy and Class Struggle says Rex Tillerson the US Secretary of State is no diplomat and rejects negotiations with North Korea and like the Trump Administration in general are diminishing State Department soft power in favour of military threats - which become meaningless unless carried through with military action - "Mad Dog" Mattis might believe in a winnable Korea War but that is why he is called a "Mad Dog".

Any rational mind knows that the costs of a military option on the Korean Peninsula are to high and will produce millions of deaths.

The OPLAN5015  Korean War Plan discussed below tries to avoid all out war - but the decision for this is not only in command of the United States.

China and the South Korean People are the regional forces that can stay the US hand on the Korean Peninsula - Russia should also make its opposition to OPLAN5015 more vocally known.

If China and the South Korean fail to halt OPLAN5015 then unimaginable horrors await the Korean people.

Despite pessimism of our intelligence the optimism of our will is raised by the South Korean People who removed a corrupt President against difficult odds and now in the coming months will have to put a new South Korean President in power  - who unlike Tillerson -will negotiate with North Korea and end hostilities.
. 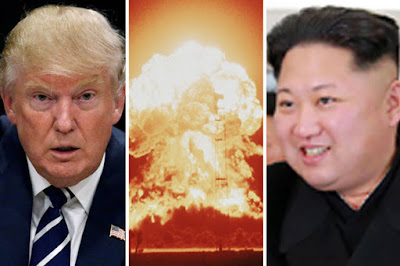 Below is Article from US National Interest on on OPLAN 5015

North Korea’s unpredictable leader Kim Jong-un has many ways of making war upon his neighbors. He can unleash commandos, or cyberweapons, or threaten to utilize weapons of mass destruction unless the world complies with his wishes.

Whether Kim Jong-un will live to see the results is another matter.

He might be assassinated by U.S. and South Korean special forces, or buried in his bunker by a bunker-buster bomb. Other smart bombs might take out his command posts and nuclear facilities. The authoritarian state of North Korea could become a state without authority, its leadership decapitated by precisely targeted strikes.

Or at least that seems to be America’s plan for fighting the next Korean War. And with North Korea conducting a new wave of ballistic missile tests, and U.S and South Korean forces practicing how to destroy North Korean nuclear sites, that plan is becoming more relevant.

Exactly what U.S. Operations Plan 5015 (OPLAN 5015) entails is classified. Fragments have been reported in the Japanese and South Korean press. But what details have emerged indicate that in 2015, a new approach was taken toward the old problem of how to fight a bellicose North Korea and its huge arsenal of conventional and unconventional weapons.

For years, the expectation had been that a second Korean War would resemble with the first, a big-unit conventional war with U.S. and South Korean forces first stopping the enemy and then counterattacking into North Korea. But OPLAN 5015 reportedly takes a more twenty-first century approach of limited war, special forces and precision weapons. Japan’s Asahi Shimbun newspaper reported in 2015 that the plan resembled guerrilla warfare, with special forces assassinations and targeted attacks on key facilities. The goal was to consolidate several older war plans, minimize casualties in a war and even prepare for the possibility that the North Korean regime might collapse.

Most important, OPLAN 5015 envisaged the possibility of a preemptive strike against North Korea.

“The new plan was said to adapt to changes in the security environment by focusing on making a swifter and more energetic military response than the previous OPLAN 5027, incorporating the concept of a preemptive strike,” according to Globalsecurity.org. With North Korea’s localized provocations becoming more frequent, there was an increasing risk of escalation. OPLAN 5015 articulated ways to respond to these threats with U.S.-ROK combined forces and, in the event of escalation, to respond to the threat of North Korea’s missiles and nuclear weapons.

Echoes of this can be seen in the current U.S.-South Korean exercises, designated Foal Eagle 2017, which will involve more than 300,000 personnel for two months of live and computer-simulated training. Citing Korea’s Yonhap news agency, the Washington Post reported that “the joint forces will also run through their new ‘4D’ operational plan, which details the allies’ preemptive military operations to detect, disrupt, destroy and defend against North Korea’s nuclear and missile arsenal.”

The question is how much stock to put in OPLAN 5015. David Maxwell, a retired U.S. Army Special Forces colonel who now teaches at Georgetown University’s Center for Security Studies, warns against taking OPLAN 5015 too literally. “My recommendation is not to try to read too much into the plans,” he tells the National Interest.

Military planners are by nature worst case planners but they also plan to provide multiple options to national decision makers for responding to crisis based on the mostly likely enemy course of action to the most dangerous enemy course of action. While there is likely Option A, B and C for every contingency, often what gets executed is Option D that is developed from A, B and C and the actual assessment of enemy actions.

Although the new plan reportedly focused not on a full-blown war but on limited warfare, a preemptive strike can escalate from a small skirmish into a large-scale war. It is hard to understand how the Korean troops would play a leading role while should a war start, Korea would not have military operational control. If that meant Korean soldiers would mostly engage in ground warfare while the US military provided naval and aerial support as some experts alleged, some South Koreans said the plan needed to be reconsidered.

Then there are the political questions, especially for those nations who will actually the bear the brunt of a North Korean attack.

South Korean lawmakers were furious in 2015 when their government balked at telling them details of OPLAN 5015.

“Although the new scheme reportedly focuses not on a full-blown war but on limited warfare, a preemptive strike can escalate—unnecessarily and disastrously—in what could go from being a small skirmish into a large-scale war,” complained an editorial in The Korea Times.
Posted by nickglais on 3/18/2017 07:39:00 AM