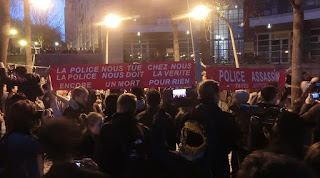 On Sunday, March 26th, the BAC [Anti-Crime Brigade] murdered Shaoyo Liu in his home in front of his family. Having carried out its operation in civilian clothing, the BAC claims to have acted in self-defence. The man was supposedly carrying a pair of scissors, although he was cooking fish for dinner at the time. Nothing more was needed for the police officer to open fire only seconds after forcing the door open.

And just like every time, the major media outlets all repeat in unison the police version of events as a single great choir as they attempt to justify this new police crime in vain. First of all, we are told that a police officer was seriously wounded until this lie was dropped, and without any serious rectification, of course. Then we are told that the man is mentally ill to produce a threatening image.

Faced with this new police murder and this avalanche of police propaganda, the Chinese community keeps up to date with the family’s version of the story using WeChat. The discord is immense. This murder and its media coverage sparks off rage in the Chinese community, which meets the following day, Monday, March 27th, in front of the Erik Satie police station of the 19th arrondissement to express their anger regarding this situation and to demand truth and justice.

In the face of police crime, let’s organise ourselves. Let us develop popular self-defence, because only the organised proletariat can be a consistent force against the repressive force of the bourgeois state. The only way to put an end to police violence and their racist oppression is to put an end to the system that generates them: capitalism. By sweeping this mode of exploitation and oppression with revolutionary history, we can end this violence! 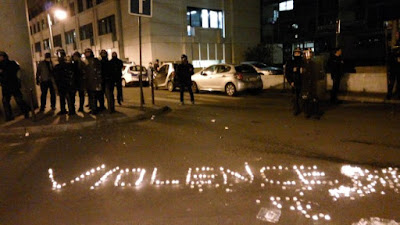 Candles were placed in front of the police barrier forming the word “Violence”. However there is really only one slogan, one word, the word of truth: “Murderer! Murderer!” shouted at the police. After several minutes, the women decide to go line themselves up facing the police. Soon after, the police march against the demonstrators, who were squeezed between the barriers and a wall. Some flee to the nearby streets to continue demonstrating, others are forced to take refuge in a building. Neighbours look out the windows to see what’s happening in the street and a demonstrator explains that the situation “is like for Théo!”. The police continue the repression the entire evening with dispersion grenades, tear gas and batons. There were 35 arrests in total.

The next day, an even bigger demonstration took place.

The Shaoyo Liu case adds to a long list of police violence. Theo’s rape, committed by BST cops in Aulnay-sous-Bois less than two months ago, is still fresh in everyone’s mind. Everyone also remembers Adama and the intense repression still suffered by his family today for refusing to be silent.

These police crimes do not take place just in any context. They have only increased under the state of emergency and continue to be increasingly legalised by the bourgeois state, notably with the lastest law on so-called “self-defence”, which is in essence a new license to kill for the forces of repression.

The Chinese community, far from the clichés generally attributed to it, demands truth and justice, as well as all those fighting against police violence. This can only be achieved by establishing a real balance of power. The greatest and most powerful revolt is the most legitimate thing in the face of such injustices. It must be shown that impunity does not exist, bourgeois justice acquits, it makes systematic dismissals for its dogs, but the people do not forgive and with every police crime, we will continue to show our anger. 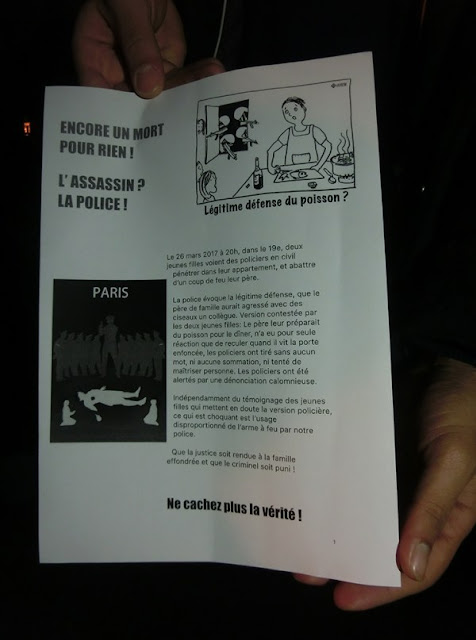