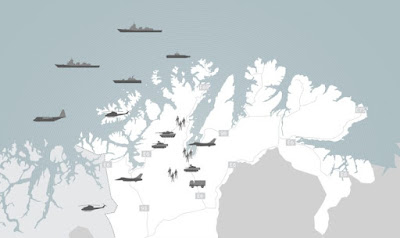 A total of 8,000 NATO soldiers have been deployed to the Finnmark region of northern Norway, 160-300 km from the Russian border, for a series of joint military exercises.

The Joint Viking 2017 exercises, which involve British, American and Norwegian troops, kicked off Monday and are expected to last until March 15.

According to the Norwegian Armed Forces website, the exercises’ primary goals are to practice crisis management and the defense of Norway.

A total of 8,000 troops are taking part, including 700 soldiers from the US Marine Corps, US Army and the British Royal Marines, which have been integrated into Norwegian units. The British and American troops took part in preparatory exercises to acclimatize them to the harsh Norwegian weather.
Posted by nickglais on 3/06/2017 12:41:00 PM