One of Indian Judicial Systems Most Shameful Decisions since 1947 : DU professor GN Saibaba and four others get life sentence for ‘Maoist links’ 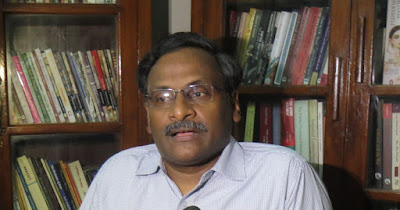 Democracy and Class Struggle says this must be one of the most shameful legal decisions since the Independence of India in 1947 a wheelchair bound professor given life Imprisonment
’
The wheelchair-bound academic was arrested in May 2014. He and five others were convicted under the Unlawful Activities Prevention Act.

The wheelchair-bound academic was arrested in May 2014 after the Gadchiroli police claimed that he had links with Maoists and was “likely to indulge in anti-national activities”. Saibaba was granted bail in April, 2016. The Supreme Court had cited his medical condition – he suffers from 90% disability after being struck with polio as a child – and the fact that all material witnesses in the trial had been examined.

On February 22, Saibaba had complained of chest pains and was taken to a local hospital, where he had been admitted to the Intensive Care Unit. He was said to have a pancreas infection, besides stones in his gall bladder stones. Doctors had recommended he have surgery in three weeks, after recovering from the infection.

Between June 2015 and December 2015, he was out on interim bail for medical treatment.

Saibaba’s family said they had been expecting an acquittal. “It is shocking,” Vasantha Saibaba, his wife, told Scroll.in. “There is barely any evidence against him – the trial proved this. We will definitely challenge the verdict.” She also claimed there was “state pressure” to have him convicted too.

His lawyer Rebecca John said they would appeal against this order. “There is absolutely no evidence against him. If the State trying to enter the mind of a person, into what his ideology is, we get these kind of orders under Unlawful Activities Prevention Act.” She added that there was no evidence that he had “any role to play in any violence, or in incitement to violence, or any active participation at all.”

Saibaba had extensively campaigned against the Salwa Judum militia and the human rights violations that accompanied the Operation Green Hunt against Maoists launched under the previous United Progressive Alliance government.

Vasantha Saibaba’s statement to the media is as follows:

Our advocates will move High Court soon. This judgement is shocking. In the history of Maharashtra this is the first case in which all the persons charge sheeted were convicted in all the sections with life imprisonment. Saibaba’s brother attended most of the arguments  of our advocates before the hon. judge and found that the judgement has not taken those into consideration. No evidence has been proved by the prosecution, electronic evidence not sealed. It seems the state and Central governments have put a lot of pressure on the judiciary to implement anti people and undemocratic policies at the behest of corporates and MNCs. The governments have selectively chosen to suppress the voice of people to plunder the resources of this country. The BJP govt. wants to push nakedly the agenda of RSS through such people like Saibaba behind the bars.

The government has chosen this case through courts to silence the voice of Dr. Saibaba. By honoring the Court, Saibaba has been attending the Court all these years and today also despite his deteriorated health. As a wife, I will fight in the higher courts to seek justice. The government has been putting relentless pressure on my family for the last four years by raiding my house in Delhi. I appeal to Democrats, people’s organizations, intellectuals, students to condemn such undemocratic character of the government. After the pronouncement, judge has rejected to issue any order on the appeal of our advocate. Advocates asked to issue an order to direct the Jail authorities to give required medicines, help of assistants for Saibaba movement, operation to perform for gall bladder etc. The minimum requirements previous the Court has given when Saibaba was in jail as under trial are also not given
Posted by nickglais on 3/07/2017 08:51:00 AM