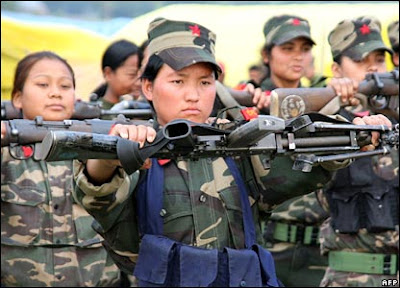 At a time when people from various quarters have lauded the seven-point agreement reached on November 1, a faction of PLA combatants cantoned at Dasharathpur-based sixth division camp in Surkhet district has expressed strong reservations over the same.

At a press meet in Birendranagar on Thursday, the PLA men close to party’s hard-line faction led by Vice-chairman Mohan Baidya said the agreement would be counterproductive for the leaders if they failed to correct it at the earliest.

Assistant commander at the division Durga Prasad Chaudhary claimed that Tuesday’s agreement signed between the political parties was not in favour of PLA integration, instead it was against integration.


“The seven-point agreement is the greatest punishment and humiliation to former combatants as it dissolves the PLA. It is not integration. It is just a recruitment process in which PLA is given 6,500 quotas,” Chaudhary told the reporters in the meet.

He said the party leadership should realise the impact of the agreement, which was signed sidelining a large section of the cantoned PLA men. “The voice against the agreement is itself a voice of revolt. The leadership has no alternative but to correct the deal,” he added.

Stating that the media covered just one-sided news of the division, Chaudhary said the press meet was organised to dispel such doubts and misrepresentation of PLA men’s views. He claimed that the leaders merely inked the agreement that was drafted by “unseen force”.
Posted by nickglais on 11/04/2011 09:51:00 AM