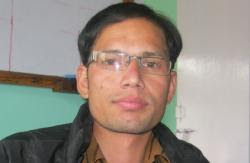 Mr. Bandhu Bikram Chhetri, originally hails from Dolakha district who is an active member of the Unified Maoist party. He had pursued Masters Degree both in Sociology and Economics from Tribhuwan University, Nepal. Currently, he is acting as the President of Kathmandu University Unit of the student wing of his party. He has published several articles on contemporary political issues in different leading Nepali national dailies.


The Telegraph Weekly and its online edition telegraphnepal.com talked to this energetic young man on several aspects of the internal rifts prevailing inside his party as a part of our ongoing campaign to promote youth leadership in the country.

Below is the excerpt of this exclusive interview: Chief Editor

Q1: The camp which you represent has already ventilated its displeasure against the Seven Point Agreement signed between the major political parties of Nepal to conclude the ongoing peace process. In this situation, do the senior leaders of your camp have issued any emergency directives to the youths like you?

Mr. Chhetri: Not at all. We are not thinking of taking any immediate action(s) and therefore our leaders have not issued any sort of emergency directives for us to remain alert. However, they have told us that we will go on asserting our discontentment through different channels.

The Prachanda-Bhattarai duo, who take themselves as the party establishment unit, is now proceeding ahead in an aggressive manner to suppress the revolutionary political lines floated by our camp. Our party is already engulfed in the whirlpool of the reformism and is slowly abandoning its long preserved precious revolutionary spirit. Our leaders have told us to make people aware of the current sorry state of our party.

Q2: Rumors are now being heard that the Kiran panel had already formed clandestinely a parallel party structure. It is said that official declaration of the formation of new party is what is being just awaited. Is it true?

Mr. Chhetri: I don’t think it to be so. But the panel led by Chairman Prachanda and Vice Chairman Dr. Baburam Bhattarai are strenuously preparing themselves for the upcoming political action. The so-called journalists and media owners, probably seduced by the Prachanda and Dr. Bhattarai team, are disseminating false propaganda saying that Kiran panel is heading to split the party. They are attempting to tarnish our image.

We are in favor of the party unity; however, such unity must be a revolutionary one. We want unity for progressive transformation and the total independence of our country. The opponent factions led by Prachanda and Baburam are trying to compel us to split the party by mercilessly suppressing the revolutionary spirit prevailing inside the party.

Q3: Have you met any of the senior leaders of your faction very recently?

Mr. Chhetri: Yes, I had met with Netra Bikram Chand 'Viplab' a few days back. We were in an informal gathering.

Q4: What did he say during the meeting? If you could!

Mr. Chhetri: I found him very serious towards the political course adopted by our party’s leadership very recently abandoning the official line passed by the Central Committee (CC) meeting of our party.

He told us that unity is possible only if the opponent faction strongly adheres to the official line of the party. Otherwise, we will go on lunching struggle against the party leadership through various fronts.

Q5: Could you please let our august readers know what could be the possible fronts of the said struggle?

Mr. Chhetri: We will go on making our cadres aware about the reformist and opportunistic tendency of our party’s central command. If needed, we will launch street protest to deliver this message to the public. Possibly, we will go up to the General Convention (GC) wherein we will hold fierce political debate. We will try our best to transform the whole party. We will not let the revolutionary instinct of our party to vanish in the ethereal medium.

Q6: Do you think that General Convention will endorse the political line floated by your panel? Will that happen?

Mr. Chhetri: We have estimated that minimum 40 percent of the total party cadres and leaders favor our political line. With the help of this presumed strong base, we will get our political line approved by the GC.

Q7: What if your panel’s political line is rejected by the majority of the participants? What next from your side then?

Mr. Chhetri: If the party decides to bow down to the reformist ideology, we along with our revolutionary comrades hoist the flag of revolution. At that time, we may take any decision that suits to the revolutionary path. We will not let the flame of revolution to blow off at any cost. We are committed to what we say. We mean it.

Q8: Does your panel in regular contact with the Peoples Liberation Army (PLA) now residing in several cantonments across the nation?

Mr. Chhetri: We have found the PLA men in a very frustrated state with the Seven Point Agreement which our party signed with other parties. They have felt that the party leadership has traded them for power and gaining cheap popularity.

Q9: But several media reports say that the PLA are very much enthusiastic and happy with the signing of the fresh agreement?

Mr. Chhetri: Nepali Media are now maliciously focused in tarnishing our clean image. They are trying to portray us as if we don’t have any stronger base. The Prachanda and Baburam Bhattarai duo had placed their men at the topmost position of the PLA establishment. Those so-called high positioned PLA authorities have been enjoying lavish lifestyle in the major cities of the country.

A huge number of PLA men at the lower position have expressed their resentment with the reformist tendency of the party’s leadership. PLA wants transformation of the Nepali society. Some fifty or eighty thousand rupees count is nothing for them. They had not fought the war for the sake of pocketing money. They had fought the civil war to empower the nation and its people.

Q10: Why your panels possess tremendous lust for the weapons and PLA?

Mr. Chhetri: I want to correct this question slightly. This is not lust, instead this is an emotional attachment. We have exchanged weapons against the blood of our great revolutionary warriors. PLA is formed out of the sacrifice of those great martyrs. How we can forget this fact and trade them with some vested interest of a particular group of people?

We favored dignified integration of the PLA men. Still we stick to this idea.

Before signing 12 Point Agreement, the Maoist party had run a parallel state. We had our own government, own economy and own army. Even the United Nation had also acknowledged the dignified status of PLA. Then how can our leadership treat the PLA as a mere bargaining chip?

Q11: Majority of Nepali population now favor peace. However, your panel always talks of People's Revolt. Do you think the Nepali people will endorse the political line of your panel?

Mr. Chhetri: Peace does not prevail simply by wishing. For this, the people should be empowered. The state should fulfill the basic needs of the people. However, the current status of our nation is just the opposite. Majority of the Nepali population are deprived of their basic needs and requirements, two thirds of the total economy is in the firm control of foreigners. Under these circumstances, how we can restore peace in the country?

We should try to understand peace in relative term. To say frankly, a true revolutionary is a true peace lover. Peace will prevail only after the revolution bags success. I believe that the Nepali people will understand this fact soon.

Q12: You mean to say that those who talk about peace inside your party are deceiving the people?

Mr. Chhetri: Exactly. Look what Dr. Bhattarai government did recently? In the price of rice, it reduced about one rupee per kilogram. Do you think one rupee can ease the livelihood of the poor people?

During his recent visit to India, Dr. Bhattarai signed BIPPA Agreement with India. How can such deceitful agreement strengthen the Nepalese economy as claimed by Dr. Bhattarai?

Q13: You mean to say that BIPPA is not in the larger interest of Nepal?

Mr. Chhetri: Right now, we are experiencing 80 percent trade deficit in our trade relation with India. Nepali economy is not in a condition to compete with the robust and rapidly growing economy of India. Competition between Nepalese and Indian economy can be compared with a marathon between a lame man and Baikuntha Manandhar (veteran marathoner of Nepal). Can a lame man catch the speed of Mr. Manandhar?

Only after attaining trade balance with India, we could have signed BIPPA. This agreement will further increase the might of India in the Nepalese economy sector. And further, it will hamper the local Industries. Telegraphnepal.com exclusive:
Posted by nickglais on 11/11/2011 01:03:00 AM