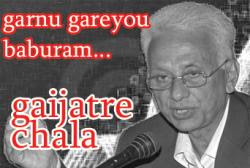 The Unified Maoists’ Party insiders claim that majority of party leaders who have been charged of criminal activities belong to Baburam Bhattarai’s camp.

In this backdrop, Mohan Baidya Kiran panel of the party has differences of opinion over Chairman Pushpa Kamal Dahal and Vice Chairman Baburam Bhattarai led group preferring to grant amnesty to the declared criminals.

Firebrand Secretary C.P. Gajurel while addressing a program in Kathmandu claimed that the government decision to grant amnesty to CA member Dhungel is a gaijatre act. Gajurel is close to Baidya camp.

Gajurel was of the view that the government unnecessarily dragged the ornamental President Ram Baran into controversy. The cabinet had forwarded the decision for approval at the Presidential Secretariat.

“Prime Minister Bhattarai’s blunders one after another have put the county in an awkward situation”, he also claimed.

However, Nepal’s Apex Court, November 13, 2011, has ordered the government not to proceed ahead with its amnesty scheme.

Democracy and Class Struggle says this article in The Nepal Telegraph misreports what Gajurel says. Gajurel wants collective solution to these legal cases and problems and not individual solutions which are being persued by Bhattarai.
Posted by nickglais on 11/14/2011 10:51:00 AM