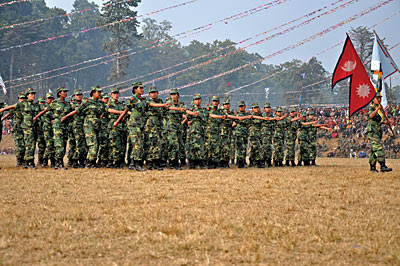 The timetable for the regrouping of the Maoist combatants is likely to fall behind schedule with majority of the members of the Army Integration Special Committee (AISC) remaining out of the country at the moment.

Five of the AISC members are now in the United States – four of them attending a training programme organised by the US Army.

A meeting of the committee scheduled to take place on Sunday had to be cancelled due to the absence of the members. The AISC secretariat notified about the postponement of the meeting citing lack of quorum.

The meeting was to take up the modality of the rehabilitation package prepared by secretariat.

Pokharel’s personal assistant Dipendra Shrestha told Nepalnews that the leaders went to the US at the invitation of US government for the civil-army relationship training “aimed to help in the formation of new national security policy of Nepal”.

The Dahal-led delegation will meet United Nations General Secretary Ban Ki-moon in New York to seek support for the development of Lumbini as an international Buddhist hub. nepalnews.com\