Occupy London to host first ever gathering of UK occupations 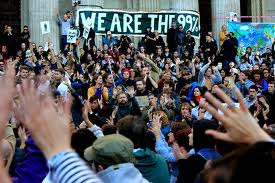 Occupiers from Occupy London’s camps – at St Paul’s Courtyard and at Finsbury Square – will this weekend (19-20 November) welcome representatives from occupations across the UK, who are coming together for the first time ever.

With more than 25 occupations across England, Northern Ireland, Scotland and Wales already, delegates will begin defining the national campaign, addressing common challenges and work to find ways of moving forward. [1]

Occupations from as far afield as Newcastle and the Isle of Wight have confirmed that they will be attending, with Occupy London providing a travel subsidy to cover costs. Also attending are Bath, Brighton, Bristol, Cardiff, Edinburgh, Liverpool, Norwich and Plymouth. Occupations in Ireland have also been invited.

Nicole Jewitt, supporter from Occupy Sheffield, comments: “In the last five weeks, we’ve seen Occupy camps spring up across the UK, as people take to the streets challenging economic inequality. With more than 40,000 people in Sheffield trapped in a spiral of debt, some of the highest unemployment figures in the country and severe cuts to services, it is galling to see news like the sale of Northern Rock, a bank saved by taxpayers being bought dirt cheap with Sir Richard Branson’s Virgin Money.” [2]

“Now is the time for occupiers and supporters to come together, share knowledge and experience. We need to start working towards a national consensus on the changes we want. We are keen to reach out and work with our neighbours in Ireland as well as those in Europe, the US and around the world.”

Over two days of workshops, plenary sessions and discussions, the occupiers will be forging important links with each other and working out how best to develop the movement throughout the UK and Ireland, as well as the global community. Groups fighting against the cuts and their wider consequences of unemployment, homelessness and fuel poverty will be represented. Social justice campaign groups will also be in attendance, including those focusing on environmental issues and others tackling violence against women as well as racism, sexism and other forms of discrimination.

“This is our first chance for UK occupiers to get to know each other. We are aware that Occupy London has received more than its fair share of attention – lots of people don’t even know that there are other occupations in the UK,” said Jenny Atkinson of Occupy London. “Its time for that to change. That is why we want to get everyone together, so that we can do more to support our fellow occupiers.

“With the news about Northern Rock, the timing of this conference is also key. We are seeing the authorities and banks focusing again on the elite with cheap sales of assets favouring the rich one per cent, rather than those truly affected by the crisis – like those stuck with increasing negative equity as falling house prices hit those with Northern Rock mortgages.”

[1] UK-Ireland Occupations Convention – Agenda
[2] BBC – Up to 40,000 people in Sheffield ‘trapped by debt‘:
[3] Nearest tubes for the Occupy London Stock Exchange (OccupyLSX) site are St. Pauls, Mansion House and Canon Street; buses 4, 11, 15, 23, 25, 26, 100, 242; do check Transport For London website for delays and closures. The Occupy London Finsbury Square (OccupyLFS) site is near Moorgate; buses 141, 153, 205, 21, 214, 43
[4] On Sunday 16th October at an assembly of over 500 people on the steps of St Paul’s Cathedral, Occupy London collectively agreed an initial statement. Please note, like all forms of direct democracy, the statement will always be a work in progress.
[5] Bringing together a diverse range of people, Occupy London’s Stock Exchange, Finsbury Square (OccupyLFS) and Bank of Ideas are part of more than 30 occupations happening in towns and cities across the UK and over 1,000 actions worldwide coming together under the banner of “United For Global Change” calling for true democracy. Occupy London is supported by groups including UK Uncut, the London-based Assembly of the Spanish 15M movement and many others. It has already received phenomenal interest, from the public and media in the UK and around the world, with the OccupyLSX facebook group now more than 31,000 members
Posted by nickglais on 11/18/2011 12:16:00 PM