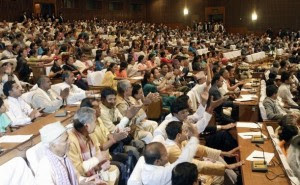 Constitutional Committee of Constituent Assembly (CA) has decided to form a committee of experts for drafting a new constitution in place of CA. The meeting of the constitutional committee held today has taken this anti-people decision. It was already calculated that so called high level political mechanism was/is going to exclude the elected sovereign body, the CA. It had already detained the CA and it was advancing to abort it any time. Now the mandate and the aspiration of the people have been aborted since today. Six hundred and one representative of the those people from marginalized and discriminated region, caste, ethnicities, Muslim, Madhesh and dalits are made jokers and the handful leaders have grasped authority in their hand. It is a ‘miraculous’ and ‘democratic’ coup d’etat for peace and constitution.

It is no doubt that Indian ‘experts’ will be summoned to draft constitution for Nepalese people which was the ‘spirit’ of 12-point understanding made in Delhi. Analysts say that the constitution has already been drafted in Delhi and the so called leaders are now creating a favourable environment by declaring to exclude entire CA from its essential task of writing constitution.

Calculating the future protest, the leaders and the heads of the government are preparing to declare emergency when the imported constitution is made public. The emergency will not be declared in the name of stopping protest, but it will be declared in the name of implementing BIPPA (Bilateral Investment Promotion and Protection Agreement) signed by PM Bhattarai and imposed unilaterally by South Block. A very thin voice has been heard from the CA members that they are saying the team of the expert should be inclusive
Posted by nickglais on 11/05/2011 04:55:00 PM