Interview with Stephen Graham on Democracy Now author of Cities Under Siege: The New Military Urbanism 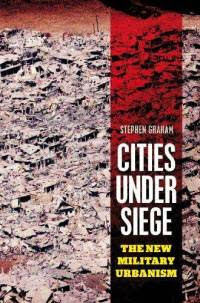 NERMEEN SHAIKH: Well, as police forces violently crack down on protesters across the United States and Europe, we turn now to an author who looks at the increasing influence of military technology on domestic police forces. Stephen Graham is professor of Cities and Society at Newcastle University in the U.K. His book, Cities Under Siege: The New Military Urbanism, looks at the links between military counterinsurgency tactics deployed in war zones abroad and the methods of surveillance and control increasingly used in urban areas around the world.

Stephen Graham, welcome to Democracy Now! Could you say a little bit about what the significance of your findings in the book were regarding the Occupy movements, in the U.S. particularly?

STEPHEN GRAHAM: Yes, well, the book really tries to look at the ways in which police forces are increasingly using sort of military ideas and military tactics at the domestic scale to confront particularly mobilizations in cities, such as the Occupy movements that we’re talking about here, and how those tactics and ideas and, increasingly, technologies have very close links, very big security-industrial complexes, to the moves in the military towards a really intense focus on cities and on counterinsurgency tactics in sort of war zone cities such as Baghdad and Kabul.

NERMEEN SHAIKH: In a CNN article that appeared yesterday, the author talks to a police officer who reports that now the kind of equipment that’s accessible to the police includes machine guns, tasers, and also that larger and mid-sized police departments in the U.S. now have access to tanks. Can you say something about how this happened?

STEPHEN GRAHAM: Well, there’s been a longstanding shift in North America and Europe towards paramilitarized policing, using helicopter-style systems, using infrared sensing, using really, really heavy militarized weaponry. That’s been longstanding, fueled by the war on drugs and other sort of explicit campaigns. But more recently, there’s been a big push since the end of the Cold War by the big defense and security and IT companies to sell things like video surveillance systems, things like geographic mapping systems, and even more recently, drone systems, that have been used in the assassination raids in Afghanistan and in Pakistan and elsewhere, as sort of a domestic policing technology. It’s basically a really big, booming market, particularly in a world where surveillance and security is being integrated into buildings, into cities, into transport systems, on the back of the war on terror.

AMY GOODMAN: And then, talk about the issue of surveillance, whether we’re talking about how the Occupy movements are being watched, surveiled, monitored. Very interesting to hear Oakland Mayor Jean Quan say on theBBC that they’re coordinating—and they are coordinating with the FBI, they’re coordinating with Homeland Security—in dealing with these movements. So, talk about the surveillance apparatus, something you know very well from Britain, and name names. What are the corporations involved?

STEPHEN GRAHAM: Well, there’s a whole variety of corporations linked to university research departments, linked to large-scale data-mining companies, linked to companies like Raytheon, who most people know of as making missile systems. Increasingly, they run border surveillance systems for things like the airline security and so on, which is a big thing in Europe and North America. But the key point really here is that surveillance is being used to try and track activist groups, permanently sort of monitoring them, using video systems, using database systems, and to allow infiltration. These are very much seen as movements that need to be infiltrated. In the U.K., there’s been a big scandal because of undercover police going into activist movements across Europe—green movements, social movements and so on—with a view to sort of basically being informers and spies to allow police to sort of crack down on what is effectively completely legitimate democratic activity.

NERMEEN SHAIKH: What do you think the significance is, Stephen Graham, of the fact that protesters across the U.S.—and it’s been true in Europe, as well—are increasingly characterized as somehow criminal—drug addicts or sexual predators—or somehow a sanitation or a health hazard to the communities in which they’re protesting? Can you say a little bit about how this works?

STEPHEN GRAHAM: Well, in the book and elsewhere—other authors are writing these things, too—I think it’s important to put this debate in the bigger context of how cities have changed. And cities in the last 20 or 30 years, particularly in North America, have become much more sanitized, much more controlled by questions of zero tolerance, by questions of really aggressive policing, to clear out those that are deemed to be sort of not fitting a model of urban life, which centers on consumption, which centers on business. So there’s been a really powerful shift in cities to sort of criminalize homelessness, to criminalize panhandlers, to criminalize those not seen to belong in this—what Neil Smith in New York has called the "revanchist city," the city taking back spaces for the wealthy, effectively. That was very much Mayor Giuliani’s strategy.

So, in a way, I think what the Occupy movement is so powerful at is demonstrating that by occupying public spaces around the world, and particularly these extremely symbolic public spaces, it’s reasserting that the city is the foundation space for democracy. And we have to reassert that symbolically and with the actual groupings of the activists in space. So the internet is not enough. It’s very much necessary to reassert that cities are political spaces which need to be used to mobilize social and political change.

AMY GOODMAN: And you talk about how the population centers have so dramatically shifted, not only in the United States, but around the world, to the cities. And it’s that question we’ll end with, Stephen Graham.

STEPHEN GRAHAM: Absolutely. Well, I mean, last year, we moved past the moment where 50 percent of the world was living in cities. By 2050, 75 percent of the world’s population will be living in cities. But too often, political and military power is controlled by people who see cities purely as threats, purely as sites of unrest, sites that need strong military and security control. And what’s so wonderful about the Occupy protests is that there’s a different, a much more hopeful idea of cities being pushed there, in a world where we have a really radical crisis and a radical sense of illegitimacy for the social model that we’re all still having to live under.

AMY GOODMAN: Stephen Graham, I want to thank you for being with us. His book is called Cities Under Siege: The New Military Urbanism.

The way the military /police/ intelligence idea of a Human Terrain Systems developed is examined in the article below - it appears to be a key concept in miltary/police thinking.

For those interested in the whole idea of the militarisation of the city by para military police and the idea of Human Terrain Systems you should read :
http://onlinelibrary.wiley.com/doi/10.1111/j.1467-8322.2008.00561.x/pdf