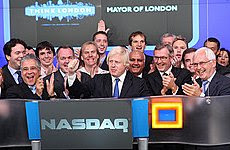 Bankers4Boris, who held a thank you party for Boris Johnson outside the Mayor’s office yesterday morning (Wednesday) have been distressed by some of the press coverage they have received.

They have written to us asking that we give their side of the story. Occupy London is an inclusive movement and, as such, we are of course very happy to give Bankers4Boris their right of reply.

Here is Bankers4Boris’ open letter to the Mayor of London, outlining the work he has done to help their community.

Bankers4Boris Open Letter to the Mayor

We are writing to you to thank you for all the support you have given us over the past year.

At a time when there is such focus on the actions of the top 1%, with some even seeking to blame us for the financial crisis, we appreciate how you have stood by us through thick and thin, recognising the vital role that we play in creating wealth.

Your recent call for new laws to prevent tent cities “erupting like boils” across London from those protesters who seek to highlight how well the 1% has done in recent years at the expense of the bottom 99% was, in our opinion, an example of your ever excellent judgement.

Likewise, we believe you showed great wisdom when you called for an end to the 50p tax rate on earnings over £150,000. This tax really is making it rather difficult for us. As you know, £150,000 per year is nothing out of the ordinary and doesn’t stretch very far nowadays. We wholeheartedly share your view that your £250,000 top-up salary for writing a Daily telegraph column is “chicken feed”.

Similarly your warning to politicians not to engage in rhetoric over bankers’ bonuses is courageous and was most welcome.

We were pleased to see recently that an analysis of your official diary has shown that between May 2008 and March 2011, you held 86 meetings with bankers and the financial services industry. We hope that these were as fruitful for you as they were for us. We do not understand the bewilderment from some quarters that in the same period you only held 15 public meetings with Londoners and 5 press conferences. It’s good to know that we have a Mayor of London who really understands who the truly important figures are in this city,

To show you just how much we appreciate your defence of bankers, our bonuses and lower taxes for us, we have thrown a little party today. But rest assured, we have much more substantial support lined up for you in the coming months as you seek re-election. To this end we have formed a new network, Bankers4Boris and will be in touch soon to see how we can help each other over the coming months.

Your ever loyal friends at Bankers4Boris.