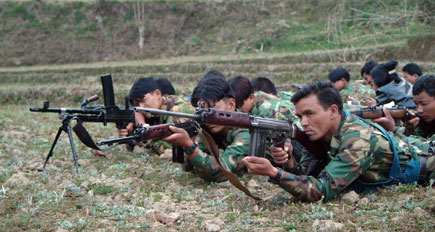 A press meet was organized in Damak of Jhapa district, Saturday November 5, 2011 by eleven commanders of the Peoples’ Liberation Army to summarily reject the so-called 7-Point Historic Peace Deal signed by Nepal’s major parties last Tuesday.The Peace deal was signed between parties to conclude the peace process, November 1, 2011.The Commanders belonged to the First Division Headquarters of the Peoples’ Liberation Army located in Chulachuli of Ilam and from three other satellite cantonments.

“This agreement is an insult and aims to totally disarm the Peoples’ Liberation Army,” said deputy commander Baburam Rai of Chulachuli Brigade, “We will not accept the integration as stipulated in the deal”.

“This agreement is a farce. We will not accept the job to guard the forest. This agreement has ignored the party decision,” said Dev Raj Limbu.

“We would like to tell that not all of us are happy as is being projected by the media,” he also claimed.