The Question is of Correct and Incorrect line – Mohan Baidya “Kiran” 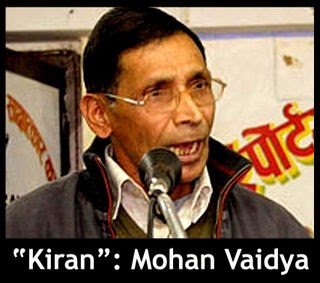 This interview with Red Star was before cancellation of latest central committee meeting of UCPN (Maoist) has Prachanda had to go to attend Buddha birthplace Lumbini promotion meeting in USA !

What priorities for a Party Chairman with the UCPN (Maoist) in serious crisis !

Why are you opposing all the activities of your party chairman Com. Prachanda along with 7-point agreement?

First of all, Seven-point agreement is the decision made to dissolve People’s Liberation Army (PLA). I want to clarify that the PLA has its significant role in establishing the republic. The role and contribution of PLA contributed in the process of changing the entire Nepalese society has been under estimated and devaluated. Therefore, we are here to oppose the agreement and to make chairman correct his weaknesses.

Second, we are putting our clear opinion in the meetings of our party committee to take decision for respectable integration of the army. But, the agreement has been made against it. Our party leadership has signed this agreement. We have clearly put it in the central committee meeting that the agreement is wrong and we would like to put our protest even in the meeting of high political mechanism. We have humbly requested the leader to take decision in this issue in coming central committee meeting; but he rejected and went against the party decision.

We put our opinion in the high level meeting of the political parties and we are protesting.

If so, are you opposing only to oppose? International institutions are highly regarding the agreement ?

Admiration to the agreement is only by the ruling class. Only imperialists, expansionists and their puppets are admiring it. Nepalese people and the people of the world are not admiring it. Workers, peasants, women, janajaties, dalits, Madheshi, Muslim and the marginalized are not admiring it. They are in favour of respectable army integration and a new constitution addressing their aspiration. What the stand of the people is that constitution should be made at first and the process of the integration of army should be taken into action after it. Therefore, people are with us not with Chairman of our party.

Therefore, we condemn these all.

PLA commanders and the soldiers are welcoming the decision mentioned in the 7-point agreement, why?

Is the protest technical or it is linked with the line of party?

It is related with the question of party line. However, many people think that we are going against the line and majority of the party. Actually, confusion and rumour have been created. But the truth is that we are standing in favour of the party, party line and change. The party leader, which is called institutional actor, which is breaching the line of the party, decisions of the party and deviating from changes that is expected by the people. This is a serious misfortune! We are protecting the general line of the party. We are talking what our party has taken authentic decisions in each meeting. We are fighting against fraud.

What will happen in the central committee meeting that is going to be held tomorrow?

Tomorrow is future. Many things can be changed tomorrow. In the history, the revolutionary leadership has been changed into liquidation, opportunism and they have shifted into the pole that is the pole of the enemies of the people. We can find such examples in the history. The leaders fighting for democracy have declared themselves a king after winning power.

We can take the example of our own country Nepal. UML was revolutionary in the past. It had raised the flag of revolution in any time. Today, it’s not necessary to take examples from outside. Our leadership, that led the revolution, is not deviating from the revolutionary task; serious questions are being raised here. The question is not of majority and minority but the question is of correct and incorrect. If leadership takes incorrect line and path, we are in favour of Nepalese people and majority of the party is with us.
Posted by nickglais on 11/05/2011 03:53:00 AM