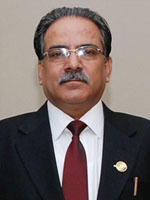 The UCPN (Maoist) establishment seemed to be on the defensive with party’s hardliner faction taking strong exception to some of its latest moves including chairman Prachanda's aka Pushpa Kamal Dahal’s recent US trip.


During the one-and-half-our meeting, Baidya aka Kiran said Dahal’s US visit was untimely and unnecessary. He also criticised the recent expansion of the cabinet.

"Vice chairman Baidya expressed dissatisfaction over the party chairman’s US visit and the recent expansion of the cabinet”, Maoist spokesperson and Minister for Education Dina Nath Sharma told reporters.


Baidya also accused Dahal and Bhattarai of deviating from the party’s ideology.
According to Sharma, Baidya also argued there is no basis for extending the Constituent Assembly’s term as chances of drafting new constitution are none.
Speaking in the meeting, chairman Dahal said main dispute is on the political line of the party and expressed ‘confidence’ that the differences could be resolved through discussion.
The CC meeting will resume tomorrow.
source:nepalanws.com
Posted by nickglais on 11/14/2011 11:00:00 AM