Vince Cable and David Cameron, the BBC and Maoism - A Comment by Nickglais 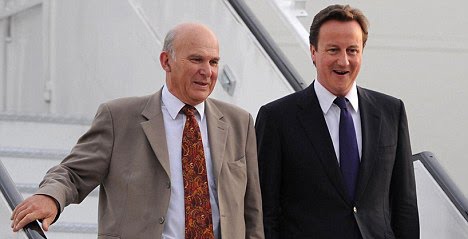 This Coalition Government launches the biggest attack on public spending in decades with the lying mantra we are all in this together.

Mega-Wealthy Survivors Have Never Had It So Good by  Matthew Lynn at :
http://www.bloomberg.com/apps/news?pid=newsarchive&sid=a79ZqHNmHZDM

Nick Clegg says how Liberal values are at the heart of government and how proud he is of the achievements of this government already.

Well Cameron,Clegg and Cable have put neo liberal values at the heart of this government and the British Isles is fast waking up to how brutal these free market neo liberal yahoo's are.

The alarm bells are ringing on the child poverty front
http://democracyandclasstruggle.blogspot.com/2010/12/uk-spending-cuts-will-see-rise-in.html

The alarm bells are ringing on the homelessness front.
http://www.bbc.co.uk/news/uk-wales-11889056

We have already seen students spurred into miltant action over education cuts and increased fees and even the Trades Union Congress is plodding into militant action in 2011.

And what do we get from the BBC political correspondent Brian Wheeler is this political garbage on Maoism.

The egalitarian politics of Maoism are the direct opposite of the politics of the yahoo's of neo liberalism Cameron, Clegg and Cable and their progenitors are Deng and Thatcher.whatever lying rhetoric the media and politicans use..

However the truth and the BBC have long since parted company. The BBC in recent times took a work of historical fiction on Mao Zedong - Jung Chang's "Unknown Mao" to be historical fact and broadcast it to the nation hoping that an ad hominem attack on Mao Zedong would invalidate his politics.

Well reality is breaking through and 2011 will be a rude awakening for the neo liberals when a new politics of serving the people and not the bankers of The City of London will reach the political agenda of Britain and some real Maoism will hit the streets at long last..

I am reminded of the coming fate of these neo liberals by Henry CK Liu who said that: