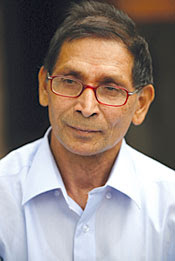 Picture Comrade Kiran
Kathmandu, 13 Dec. 2010: Senior vice chairman of UCPN-Maoist Com. Mohan Baidya \'Kiran\' said that the coming revolt will be for national independence and people\'s rule. He pointed out that the Extended Meeting of UCPN-Maoist at Palungtar has justified the suitability of revolt for the completion of revolution.

Speaking in a programme organized by Samayabaddha Monthly on the title \'Questions rose by Samayabaddha about national independence and people\'s democratic republic\', Kiran stated that imperialism; specially the Indian expansionism and the domestic reactionaries and puppets are being merged against the interest and temperament of the Nepalese people. Therefore, the only way left before the people is to revolt. He added that the concrete decisions will be taken in central committee meeting that is going to be held in near future.
Posted by nickglais on 12/15/2010 09:53:00 AM