The Student Struggle in Britain - Questions and Answers 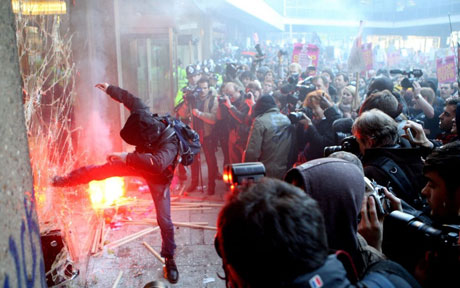 1. Why are the Students in United Kingdom demonstrating ?

The Educational Maintenance Allowance has been also abolished by this government This allowance, which gives students from lower income families a weekly benefit of up to £30, has helped boost post-16 education by around 30 per cent since it was introduced six years ago. Almost 70 per cent of 16- to 18-year-olds receive the money.

The reason so many young school students are on the demonstrations is related to the government abolishing E.M.A.

2. What is the origin of the of the changes in British government policy for student support ?

At the end of October in the higher education review Lord Browne, former boss of British Petroleum recommended higher student fees in a speech he gave at BPP.

He said of fees, ‘if prices rise too high, there is room for new providers to enter the market and deliver higher education more efficiently’

The origin of the current policy is in the neo liberal policies of the last forty years which seek to marketise or commodify everything. The current policies are to increase the penetration of private companies into higher education.

3. Do the he students have support in the wider society ?

The National Campaign against Cuts and Fees is a principal organiser of the students. Trade Union's like the RMT ( Rail, Maritime annd Transport) have appeared on the student marches.Building a solid worker student alliance is widely recognised has a key part of developing the current struggle.

4. Is it only the students in London that are demonstrating in the UK ?

No, there is very strong student protest movement in all the major cities in the UK. In many cities direct action has been taken occupying Universities.Wales and Scotland have their own Education systems making for variation in educational provision in the British Isles. .

5. What can we do abroad to support the students in the UK ?

More specifically support the November 10th Campaign 2010 to defend arrested students for breaking into Conservative Party Headquarters and any other student arrested for exercising his democratic rights.