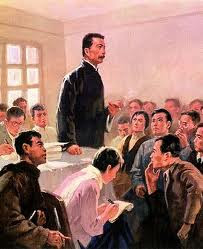 Chinese Students on December 9th 1935 engaged on a nationwide campaign to stop the KMT Government from being servile before the Japanese military onslaught.

This campaign was supported by Chinese writers like Lu Xun who while championing civility denounced servility which Confucianism had embedded in the Chinese Nation.

Mao called Lu Xun China's Cultural Revolution Commander because he understood the depth of Confucian influence on the national psyche of China.

The intellectual attack on Confucianism by Lu Xun and its servile mindset was challeged in this national campaign of rewakening China on 9th December 1935 and it was a great success and help create resistance to Japanese aggression and lay the basis for the revolution in 1949.

Today we have in Britain not Confucianism,but a thousand years of servility posing has civility sometimes reflected in a national masochism has during the Thatcher Era.

The British Left has the same love of ritual has the Confucians led by their ever "wise" Wedgewood Benn.

The students have today broken some of the servile rituals - shock horror among the British Bourgeoisie.They want to force the students and the workers back into the old pattern of defeat.

The Class War is not a Clauswitzian war of position it is fluid and its strategy and tactics owe much to Sun Tzu and Mao Zedong and the students would do well to study their works..

Much creativity is emanating in waves from the students and on the cultural front in Britain and if these waves can be encouraged and grow stronger then defeats are no longer inevitable and a new path can be charted even in an Imperialist homeland like Britain.

Empower the students,empower the workers,empower the rappers,let a hundred flowers bloom and power will begin to return to the people. The creativity of the masses will always outshine the feeble creative efforts of the bourgeoisie.

My only advice is understand what you are fighting and you can win.


See my other article Monument or Movement on the Student Struggle here :
http://democracyandclasstruggle.blogspot.com/2010/12/from-monument-to-movement-revitalising.html

Also Five Questions and Answers on the Student Struggle in Britain :
http://democracyandclasstruggle.blogspot.com/2010/12/student-struggle-in-britain-five.html
Posted by nickglais on 12/06/2010 03:11:00 PM