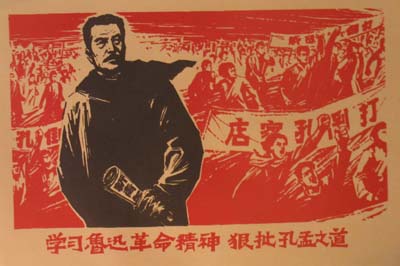 In this poster Lu Xun calls for the destruction of Confucianism

It is very clear that our enemies have seen something new in the current student movement against the fees and cuts but have we ?

To often the Left in Britain is concerned with retaining its monuments rather than developing a movement.

The ritual demonstration from A-B is dead but so is the mechanical politics that led there.

When the bourgeoisie fails to incorporate or hi- jack a protest movement it calls on its labour lieutenants of capital to take us down the old social democratic road of the re-election of a Labour Government - old Labour of course !. This is precisely the mechanical dead end that Wedgewood Benn would take has down - but he is not alone a ragbag of trotskyists and revisionists follow the same well trodden path.

I praise the new youthful vigour of the teenage school students on the demonstrations not because I am bowing to spontaneity but praising creativity - the seeking out of new paths to the future rather than back to the old routine of failure so epitomised by the old "wise" Wedgewood Benn founding father of the Coalition of Resistance.

We need to address the question of how we keep the path to a better future open and not become a monument to the past rather than a movement for the future.

This starts with a recognition of what is new and the politics of developing the new.

This is the stage of learning from the masses and unleashing their creativity to prevent the return of the Social Democratic trap - then the movement will flow - smash the monuments build a movement.