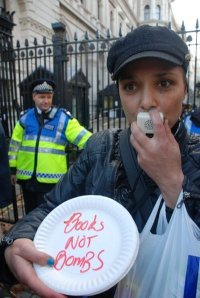 Written by Ady Cousins of Counterfire

Its now or never: Students call national demonstration for 9th December as Parliament votes on fees. Clare Solomon, President of London University, launched the greatest round of student activism yet as parliament set a date for a vote on the hike in tuition fees.

She called for a massive effort by all student activists to make the national demonstration on Thursday 9 December the greatest mobilisation ever by students.

'Teachers and lecturers need to send a clear statement to their managements that schools and colleges are going to be closed on that day and that they will be on the streets with the students'.

John Rees from the Coalition of Resistance said: 'I expect many working people to be out with the students on the 9th December. They know that the students are just the start and that the government will be coming after them next.'

He added: 'The Coalition of Resistance will be working flat out to make this a huge demonstration and we are saying to people all over the country 'be here now, your future and that of your children is at stake'.

STUDENTS PLEASE REMEMBER THE FREE MUMIA ABU JAMAL DEMONSTRATION BETWEEN  5-7pm ON 9th DECEMBER OUTSIDE THE US EMBASSY.

TO READ WHY MUMIA IS INNOCENT PRESS HERE:
http://democracyandclasstruggle.blogspot.com/2010/12/december-9th-1981-day-mumia-abu-jamal.html

ARTICLES FROM DEMOCRACY AND CLASS STRUGGLE ON THE STUDENT PROTESTS

See my other article Monument or Movement on the Student Struggle here :
http://democracyandclasstruggle.blogspot.com/2010/12/from-monument-to-movement-revitalising.html

Also Five Questions and Answers on the Student Struggle in Britain :
http://democracyandclasstruggle.blogspot.com/2010/12/student-struggle-in-britain-five.html
Posted by nickglais on 12/02/2010 12:58:00 PM