Democracy and Class Struggle protest the hearing on the 22nd of December in Bologna Italy of Angelo D'Arcangeli, Vincenzo Cinque, Rosalba Romano and Fabrizio Di Mauro 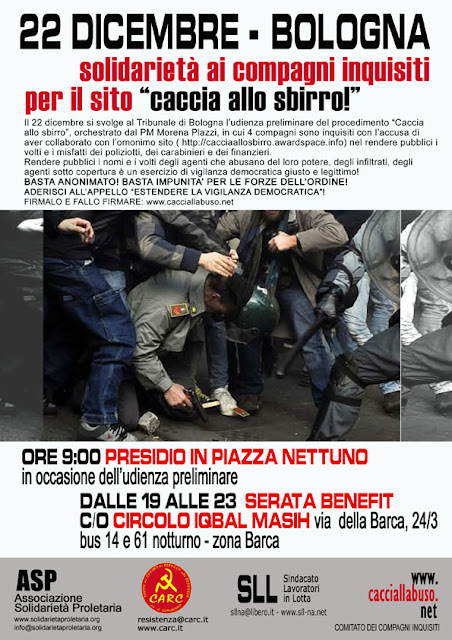 We express our protest against the trial that the Public Prosecutor Morena Plazzi (of Prosecutor’s Office of Bologna) is trying to orchestrate against Angelo D'Arcangeli (Member of the National Direction of CARC Party), Vincenzo Cinque (national leader of Struggling Workers Union), Rosalba Romano (Association for Proletarian Solidarity), and Fabrizio Di Mauro, accused of having promoted the democratic watch and to have worked to show police officers’ faces by publishing photos on the site “Cop Hunt” realized by the(new) Italian Communist Party.

We hope that the preliminary hearing that will be held on 22 December at the Court of Bologna will put an end to the repressive and intimidating stunt against those who fight to safeguard the conquests and democratic rights won by the Resistance and sanctioned by the Constitution.